The botanical gardens of Ninfa

In the province of Latina, at the foot of the Lepini Mountains, there is a very special place of rare and extraordinary beauty. They are the botanical gardens of Ninfa, a secret jewel located near Rome the region of Lazio. It is a wonderful oasis of tranquility, built on the ruins of an ancient city.

The botanical gardens of Ninfa are a fairy-tale place, frozen in time, where the memory of the small medieval town is still alive in the ruins of the church and in the remains of the castle.

The Giardini di Ninfa the Italian name of the botanical gardens of Ninfa, are the ideal place for a weekend visit. Together with the Sermoneta Castle and the Pantanello Natural Park, the Ninfa Gardens are owned by the Caetani Foundation. 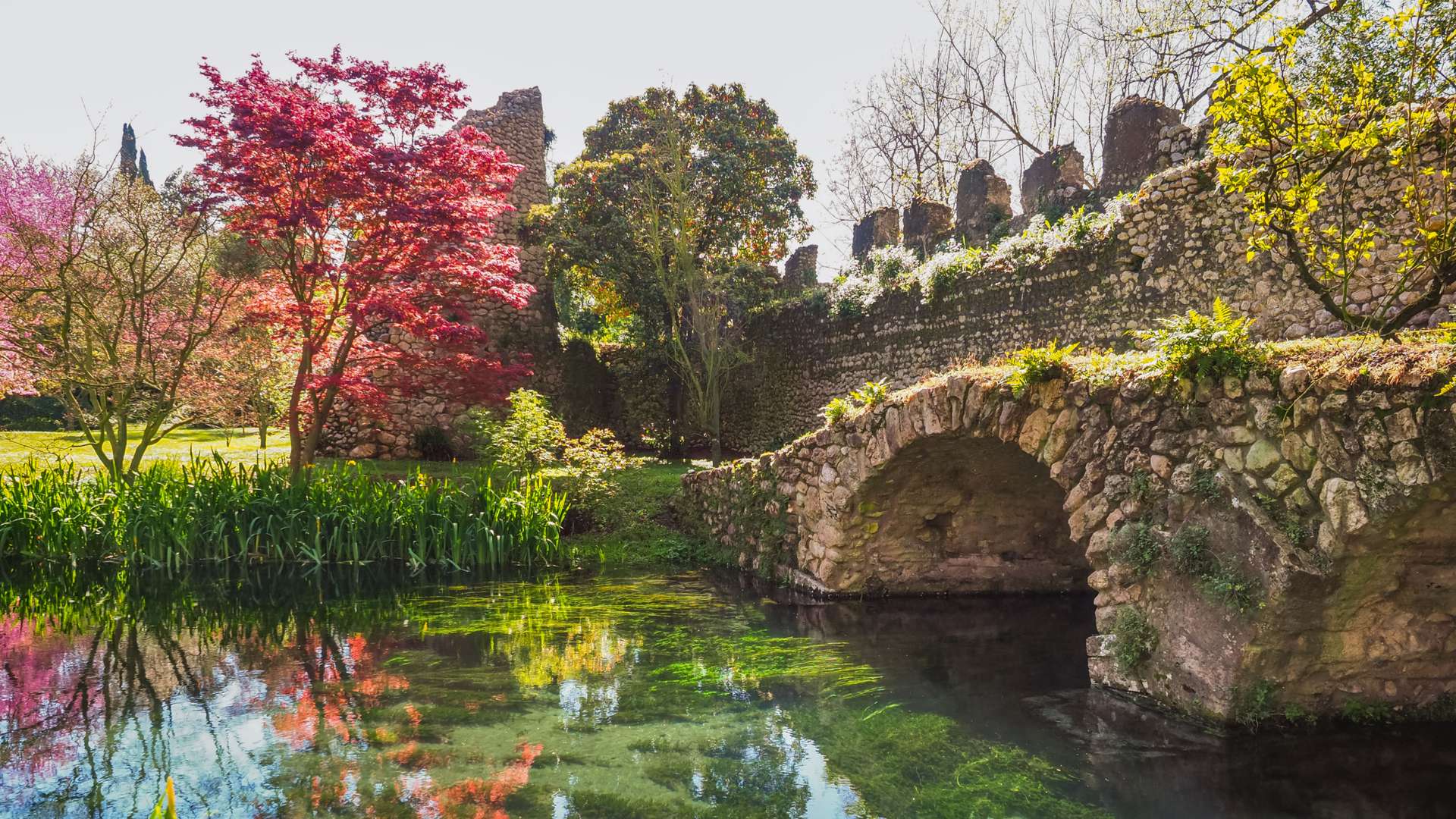 The Ninfa Gardens are located in Cisterna di Latina, on the border between Norma and Sermoneta. The gardens are a wonderful example of medieval architecture and romance; the perfect place to immerse yourself in the past, in a fairytale world that has inspired great writers such as Virgina Woolf, Truman Capote, Ungaretti and Moravia.

The garden covers an area of about 8 hectares and owes its name to the Roman temple dedicated to the Naiadi nymphs, located in the center of a small island. In 2000, the garden was declared a Natural Monument by the Lazio Region to protect the oasis, the habitat around the Ninfa River, the lake it forms and the surrounding areas.

Let’s take a look back at the turbulent history of the town of Ninfa, around which this fairy-tale place is built. The small agricultural town was founded already at the time of the Roman Empire, but it acquired political and religious importance only later, when the swamp flooded the Via Appia and the Pedemontana became the only safe road to southern Italy; for this reason it was necessary to pass Ninfa. 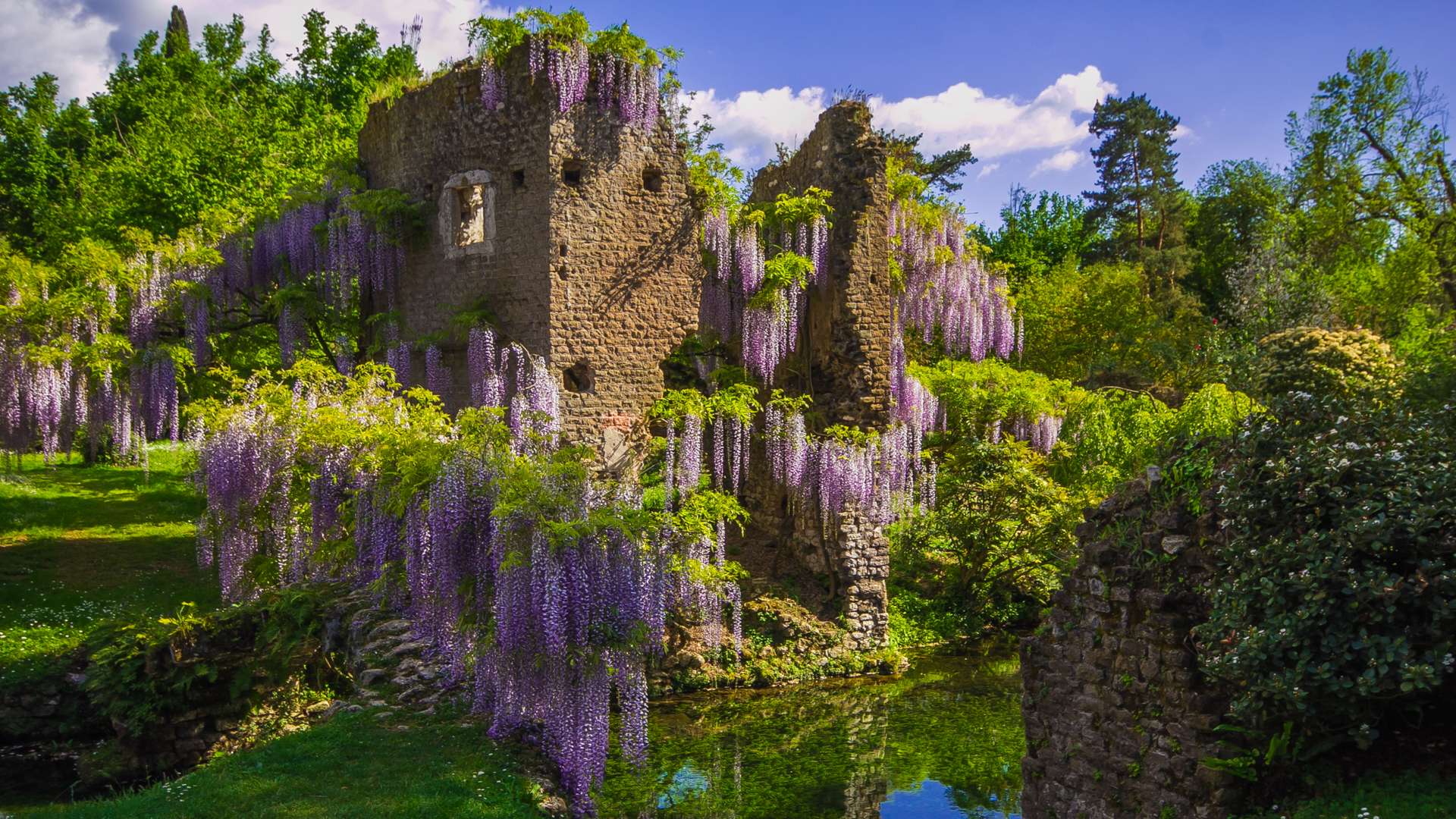 Ninfa had numerous owners over the years, all of them belonging to the Roman nobility. In 1294 Benedetto Caetani was elected pope under the name of Pope Boniface VIII. In 1298 he assisted Pietro II Caetani in the purchase of Ninfa and other neighboring towns, marking the beginning of the Caetani presence in the Pontine territory for about seven centuries.

In the 14th century Ninfa was sacked and destroyed by Onorato Caetani, a follower of the antipope Clement VII, who was against the Caetani branch to which Ninfa belonged. The town, razed to the ground, was abandoned and never rebuilt, partly because of the malaria that was rampant in the area.

The construction of the beautiful garden was commissioned by Gelasio Caetani in the early 1920s. The last heiress and passionate owner of the enchanted garden was Lelia Caetani, who combined plants and colors as in a painting and did not hinder the natural growth of the plants. Having no heir, she created the Roffredo Caetani Foundation to ensure the maintenance of the garden and the enhancement of the Lepine area to which it belongs.

In the garden of Ninfa there are the remains of Santa Maria Maggiore, a 20th century church with frescoes, a transparent river crossed by picturesque bridges, plants and flowers from all over the world.

Golf clubs, top hotels, attractions and the best restaurants for your golf and dolce vita vacation in Lazio.