As in any other part of the world, there is no shortage of Christmas trees and gifts in Italy. However, these elements are mixed with some ancient traditions, which often have a religious meaning. In addition, the Italian Christmas celebrations start earlier than at the December 24 and end later than on December 25. You may be surprised to learn that, especially in some regions, the Christmas spirit begins on December 8 – Immaculate Conception Day – and lasts until January 6 – Epiphany.

But Christmas in Italy is also a great celebration for families. Siblings, parents, grandparents, uncles and aunts…. they all gather during the Christmas vacations for at least one meal together. Those who have a large family usually spend Christmas Eve with one part of dinner, then Christmas dinner with another part, and Santo Stefano lunch (December 26, St. Stephen’s Day) with yet another part. But let’s go in order and find out together how Italians celebrate Christmas. 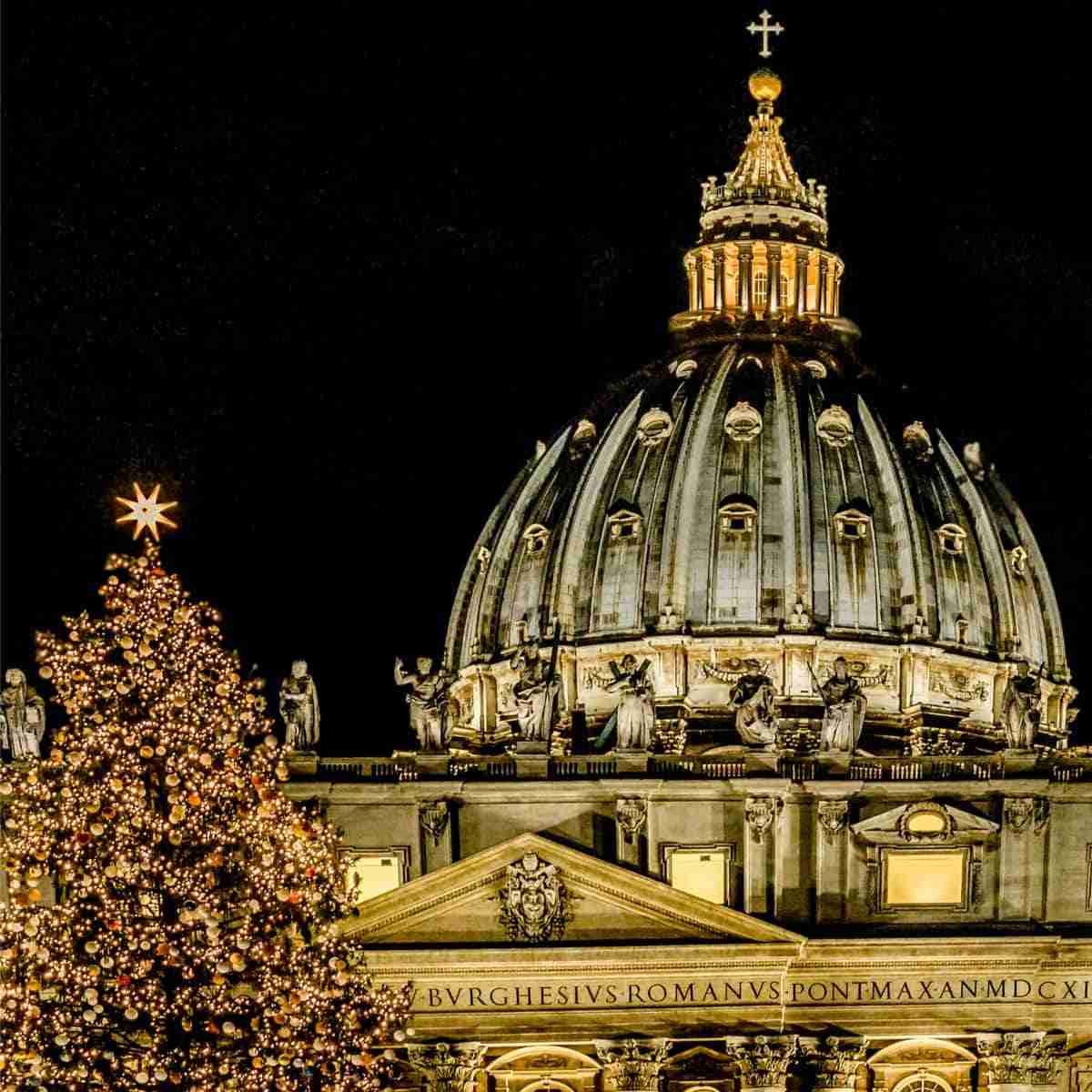 For some Italians, the real Christmas celebrations begin on December 24 – Christmas Eve. But the Christmas spirit is in the air long before that date. For example, it is a common custom to put up the Christmas tree in the house on December 8. Many Italian customs are tied to religion – the Christian, Catholic faith – even if customs have changed and the religious meaning can be forgotten. According to Christian tradition, December 8 is the date of the Immaculate Conception – schools and offices are closed from that day, giving families the opportunity to spend some time together and decorate the family Christmas tree.

In some regions, especially in Puglia, the Christmas spirit begins even earlier, on December 6, with the celebration of Saint Nicholas (SanNicolo). St. Nicholas is the patron saint of sailors and the weak, and from this figure derives the tradition of Santa Claus – Babbo Natale. Saint Nicholas is believed to bring apples to adults and children, and celebrations for him are felt most strongly in Bari, Puglia, where the saint is said to be buried. Here the so-called “Alba di San Nicola” takes place. The celebrations begin with a Mass at dawn on December 6, while hot chocolate and “sgagliozze” are served outside the basilica. The celebrations will continue with a torchlight procession through the city. 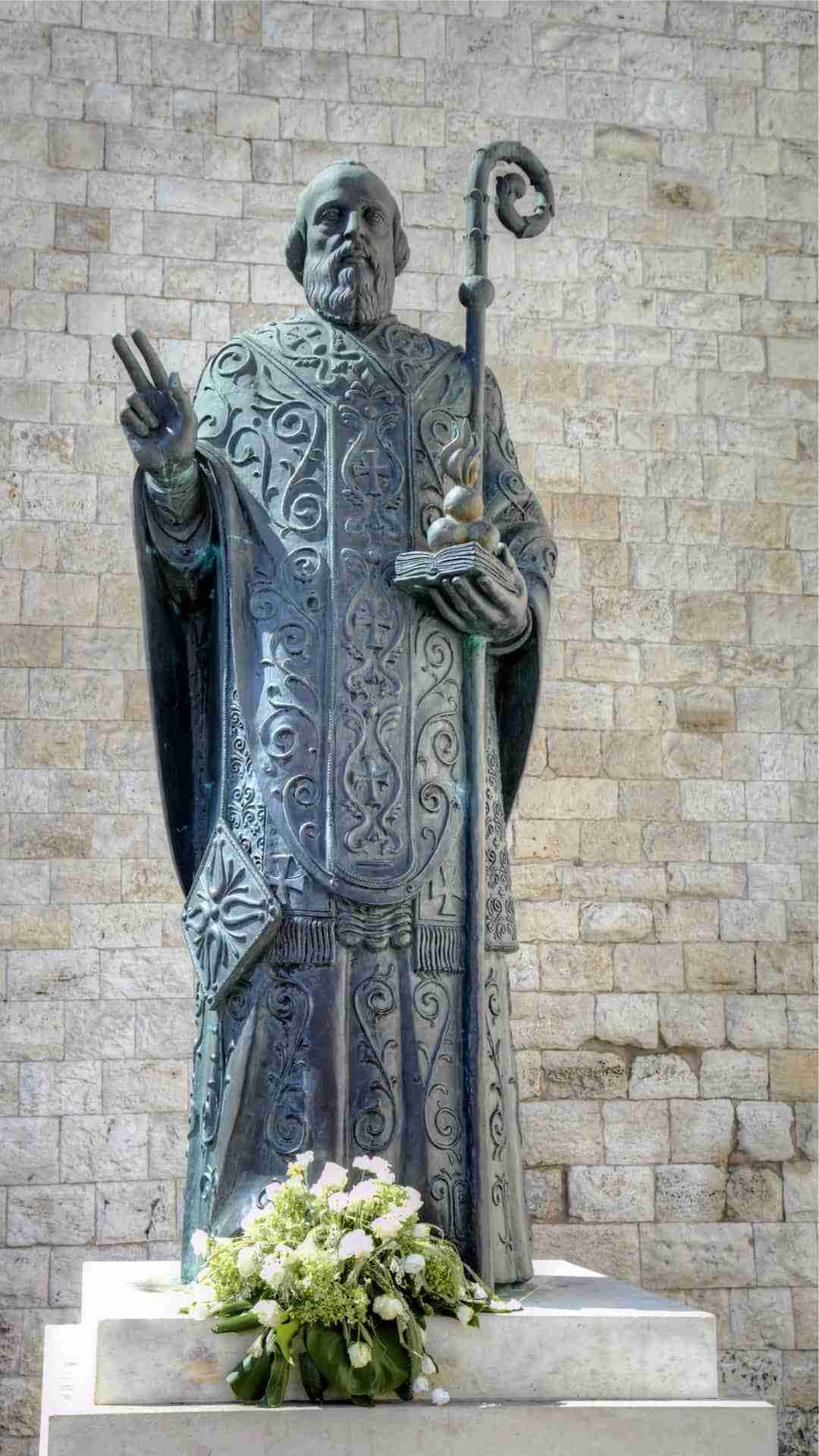 The biggest Christmas Eve tradition in Italy is the Christmas Eve dinner – along with the New Year’s Eve dinner – often referred to as Cenone, which literally means “the big dinner.” And this is really a big dinner: The family gathers around the table and eats a big meal together, with many dishes, desserts, wine and so on. If you think Italians eat a lot because their meals consist of a primo, a secondo, a contorno, sometimes preceded by an appetizer that Italians call an “antipasto” and followed by a dessert, “dolce,” and you happen to be Italy at Christmas Eve dinner, expect at least two “primi,” two “secondi,” several desserts, and an appetizer that under normal circumstances would be considered a full meal.

The peculiarity of Christmas Eve dinner in some regions is that it is based on fish. This is due to the fact that, according to Christian tradition, meat may not be eaten on. 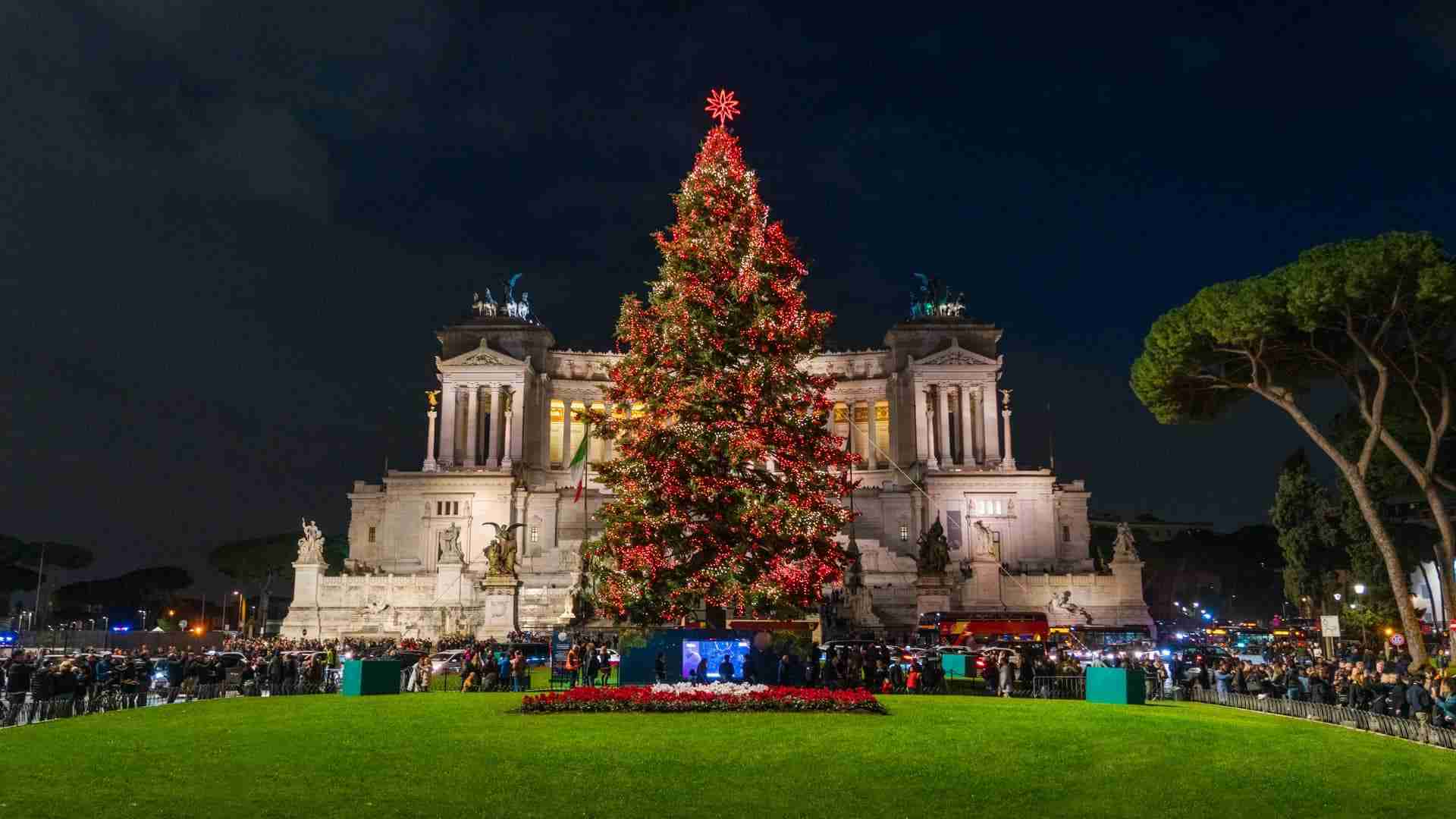 Food is also really important on Christmas Day, December 25. However, Christmas dinner comes second to the moment that adults and children love most about Christmas: Christmas morning is when the presents are opened.

As in many parts of the Western world, Babbo Natale is believed to have been born on the night of the 24. on the December 25 travels around the world to bring gifts to children who have behaved well during the year. Bad children are said to receive coal instead of presents, but still no case was reported where a child received coal for Christmas.

Also in Italy, Babbo Natale is a fat guy with a white beard and red clothes who travels on a carriage pulled by reindeer. He should enter the houses from the chimney, deliver the gifts and leave. Children and their parents often leave him some cookies or candy or chocolate to restore him during his long night of work. Finding the empty candy paper in the morning is part of the Christmas morning surprise.

After the presents are opened, the second highlight of the day is the Christmas lunch. Again, families gather around the same table and eat typical Christmas dishes. Since food is so important at Christmas celebrations in Italy, let’s see what are the most common meals Italians share with their families at Christmas. 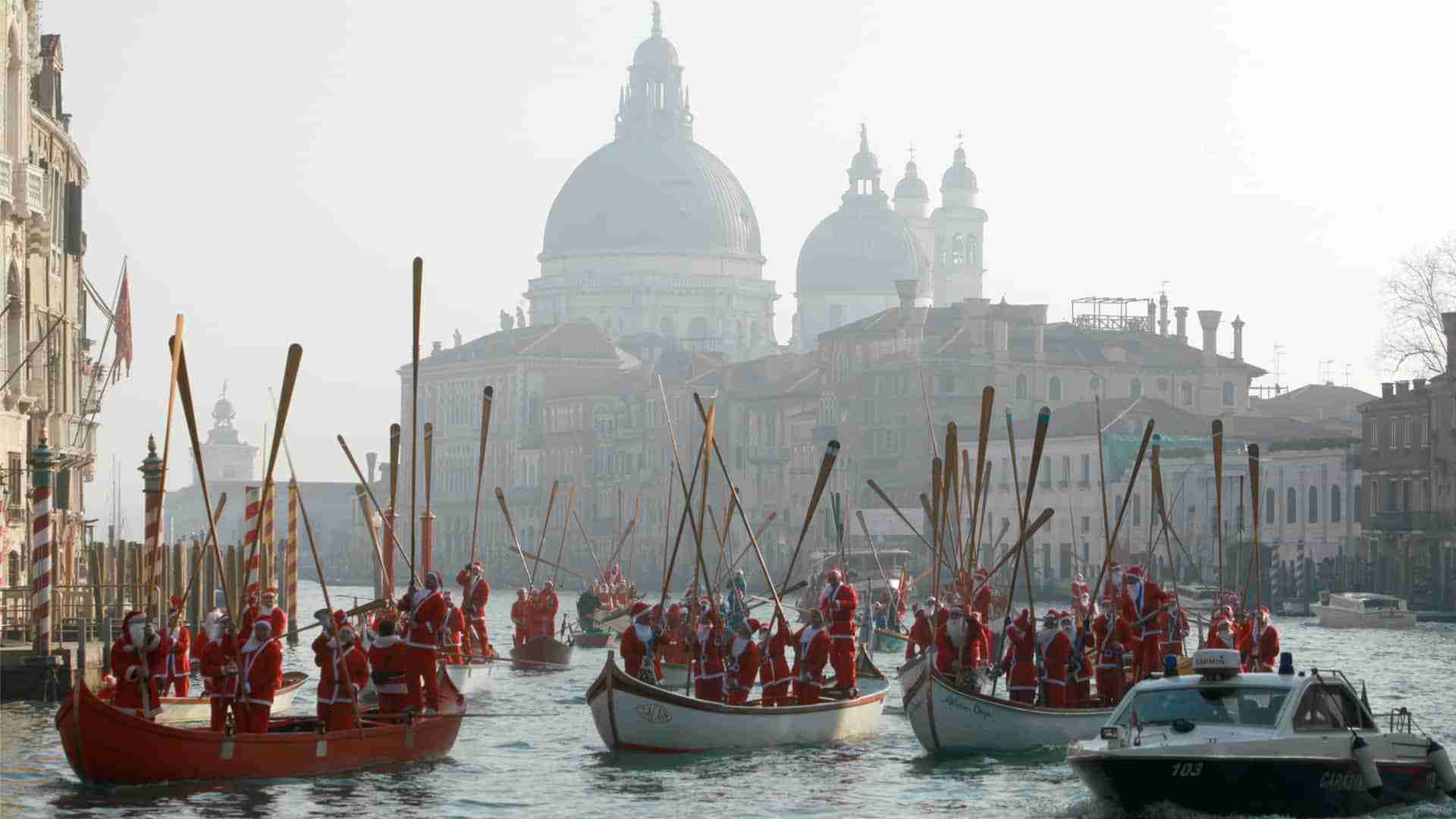 Santas on boats in the Grand Canal of Venice (photo © Vepix / Shutterstock.com)

Il Panettone is a cake that is eaten mainly in the period of celebration of Christmas in Italy. When you see panettone on the supermarket shelves, it means that the Christmas season is beginning. The Panettone is a soft cake usually filled with raisins and candied fruit. The tradition of panettone originated in the northern regions, but today it is appreciated in every corner of Italy.

Today there are different versions of the traditional panettone and all over Italy there are small stores or bakeries that make special versions of it: with chocolate, pear and walnuts, wild berries and even with ice cream!

Il Torrone is another traditional dessert at Christmas in Italy. It is a sweet almond paste, but there are many variations from region to region. A tasty version is the one where chocolate and hazelnuts replace the almonds.

While buying torrone in the supermarket is the quickest and easiest option, some families also have the tradition of preparing it in their home. It is a long and complicated process, so receiving a piece of homemade torrone from a friend is considered a highly prized gift. 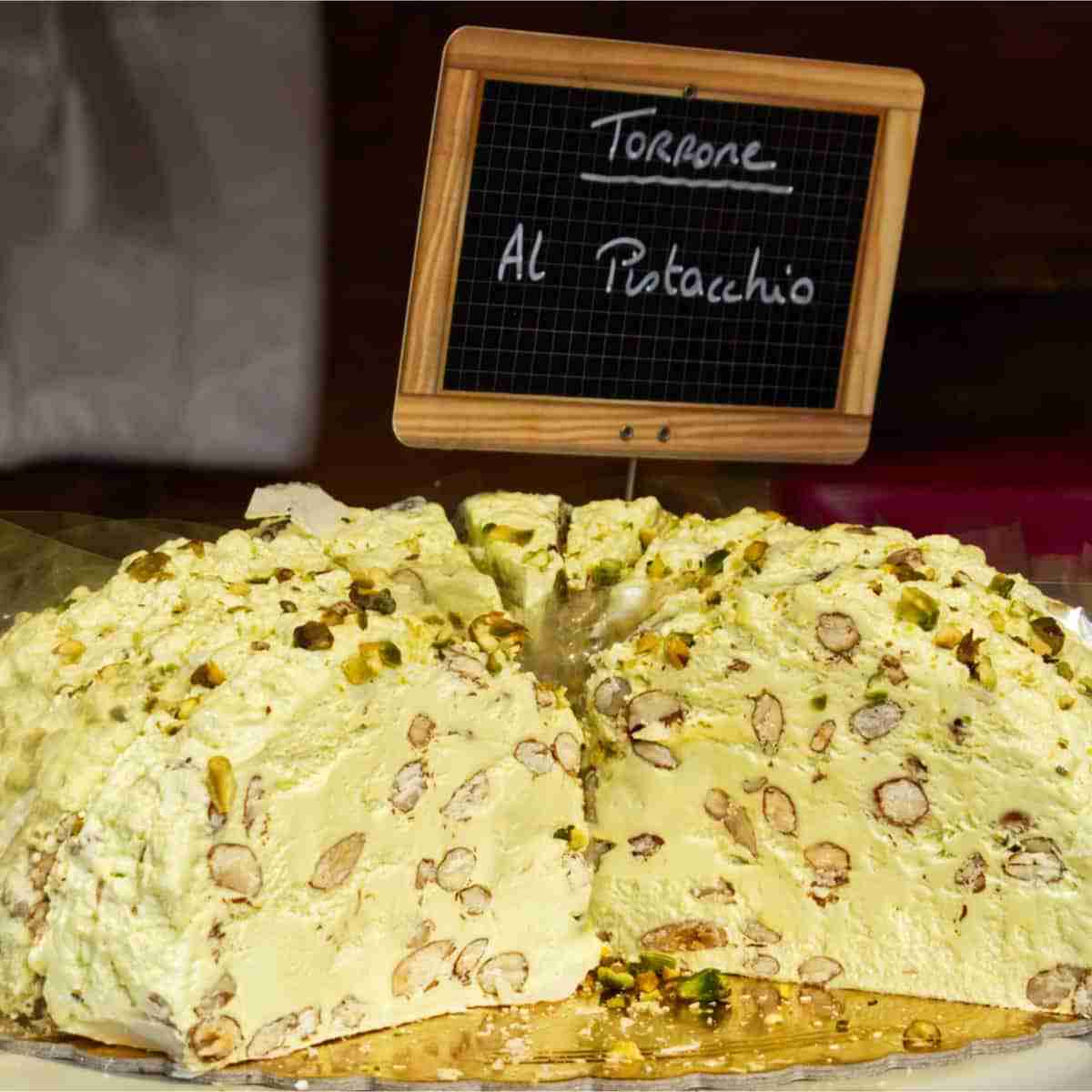 Tortellini in brodo are the typical primo – or appetizer – for a Christmas dinner during Christmas celebrations in Italy. The dish consists of tortellini – pasta shells filled with meat – dipped in a meat broth. Tortellini is a typical dish from Bologna, but on Christmas Day it is eaten everywhere in Italy. 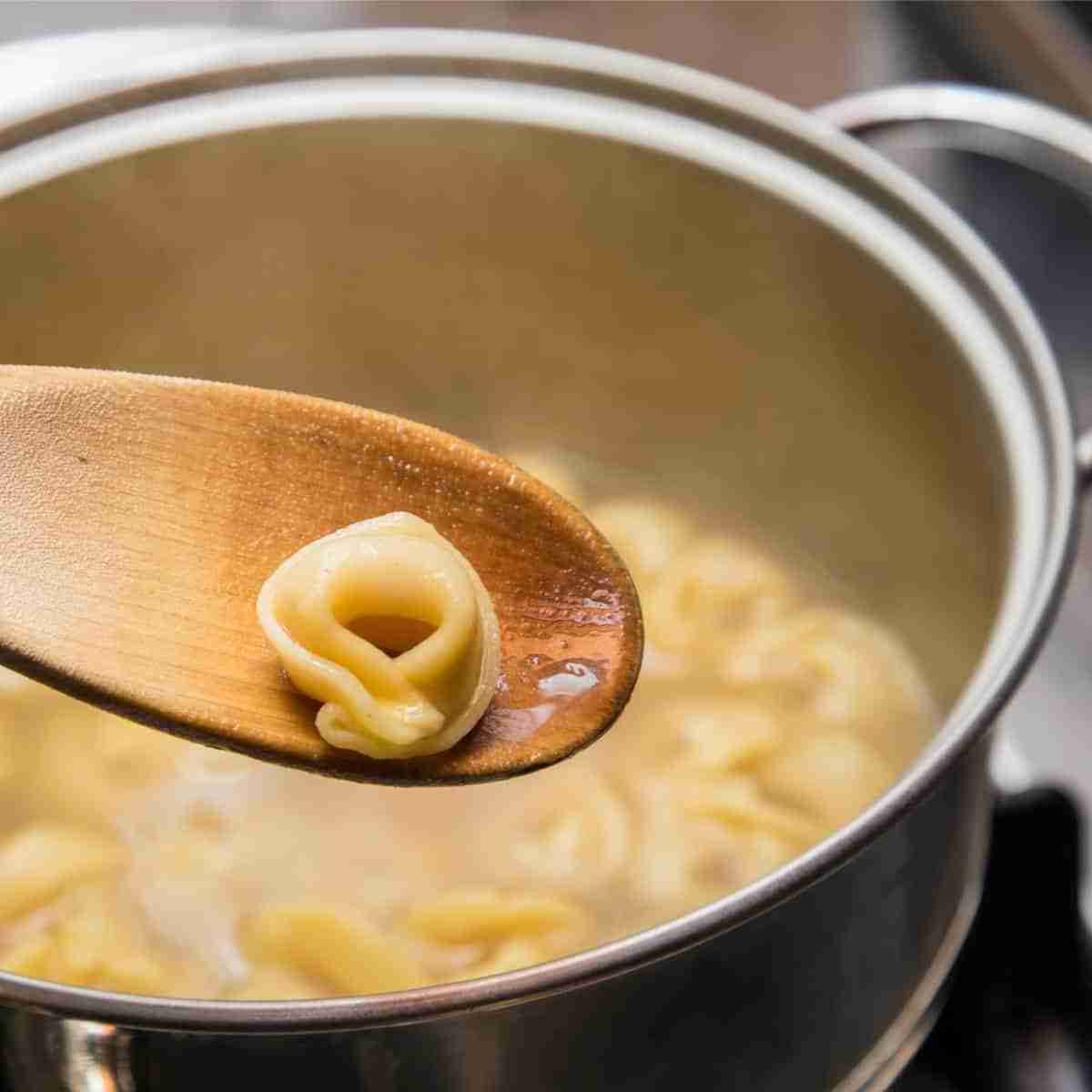 Christmas in Italy: The Feast of the Seven Fishes

If someone invites you to a “Feast of the Seven Fishes” on Christmas Eve, just expect to eat a lot of fish prepared in different ways. The most common types of fish are stockfish, seafood, eel, squid, mussel meat and clams. Again, the types of fish you find on the table vary from region to region.

A description of Christmas celebrations in Italy would not be complete without mentioning Christmas markets and nativity scenes. These are often real reasons of pride for some small towns or villages that welcome numerous during the Christmas season. 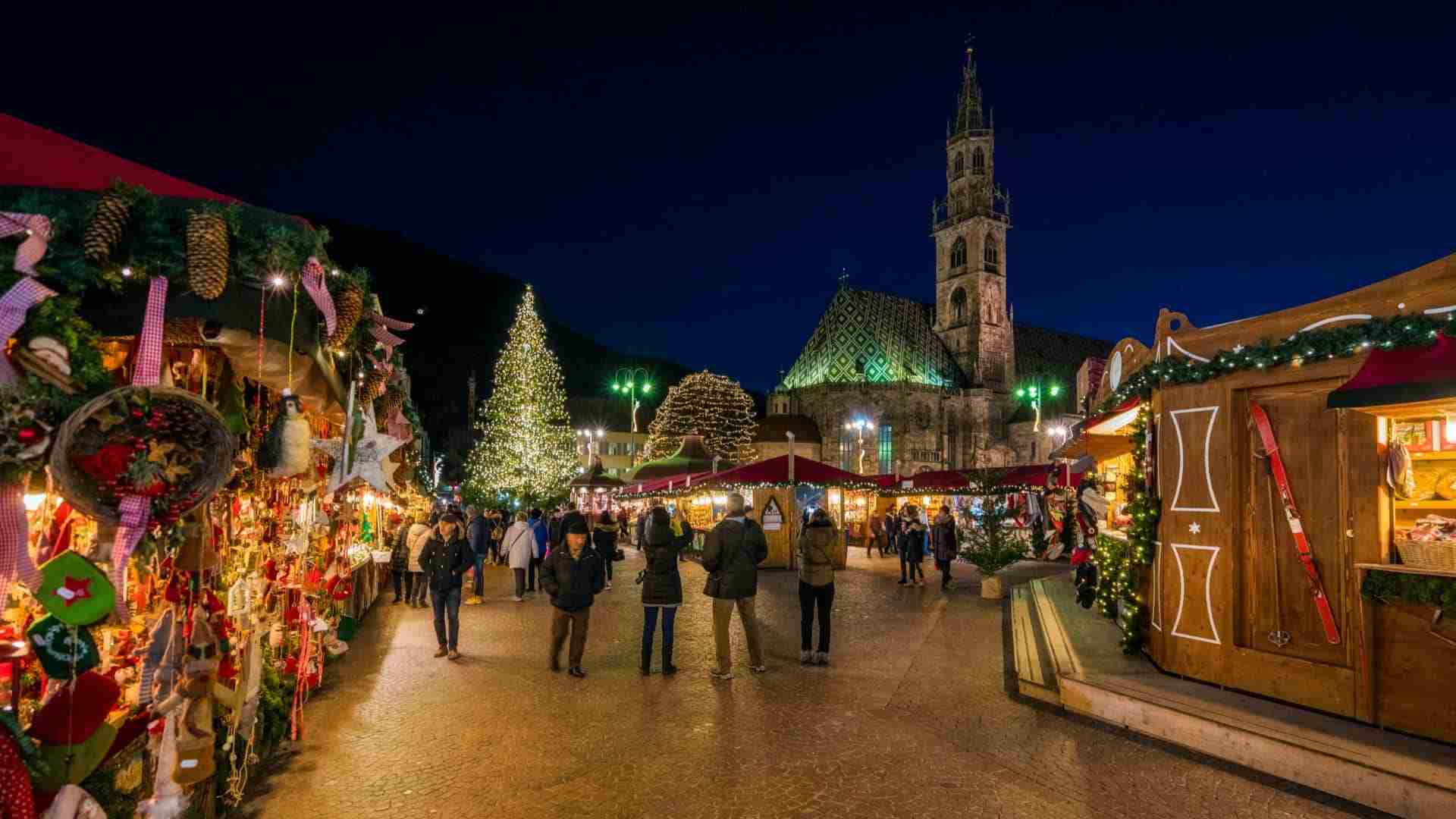 I mercatini di Natale are Christmas markets that are often held outdoors despite the cold and frost. Together with January, December is the coldest month in Italy; nevertheless, these markets are gladly visited by numerous people wrapped in coats, gloves, scarves and hats doing Christmas shopping.

The Italian crib, called Presepe – has its origin in the Christian narrative of the birth of Jesus. His parents, Joseph and Mary, moved from Nazareth to Bethlehem to take part in a Roman census. They stopped for the night in a small stable where Jesus was born. It was very cold, but the little baby did not freeze, because an ox and a donkey warmed it with their breath. In the meantime, a shooting star had appeared in the sky, indicating the way to the birthplace of the Messiah, and the three wise men followed it to the stable, bringing gifts.

All this – Joseph, Mary and the newborn Jesus, the stable with the ox and the donkey, the shooting star and the three wise men – are elements of the Italian nativity scene. In every house next to the Christmas tree there is a small stable with all the characters involved, but the real attraction is when whole villages are transformed into little Bethlehems, with people in ancient dress parading through the streets, real oxen and donkeys in the stable, and actors playing the main characters. Very famous is the“Living Crib of Matera” and the unique Christmas crib of Manarola in the Cinque Terre area, in Liguria, as well as the Cribs in Naples. 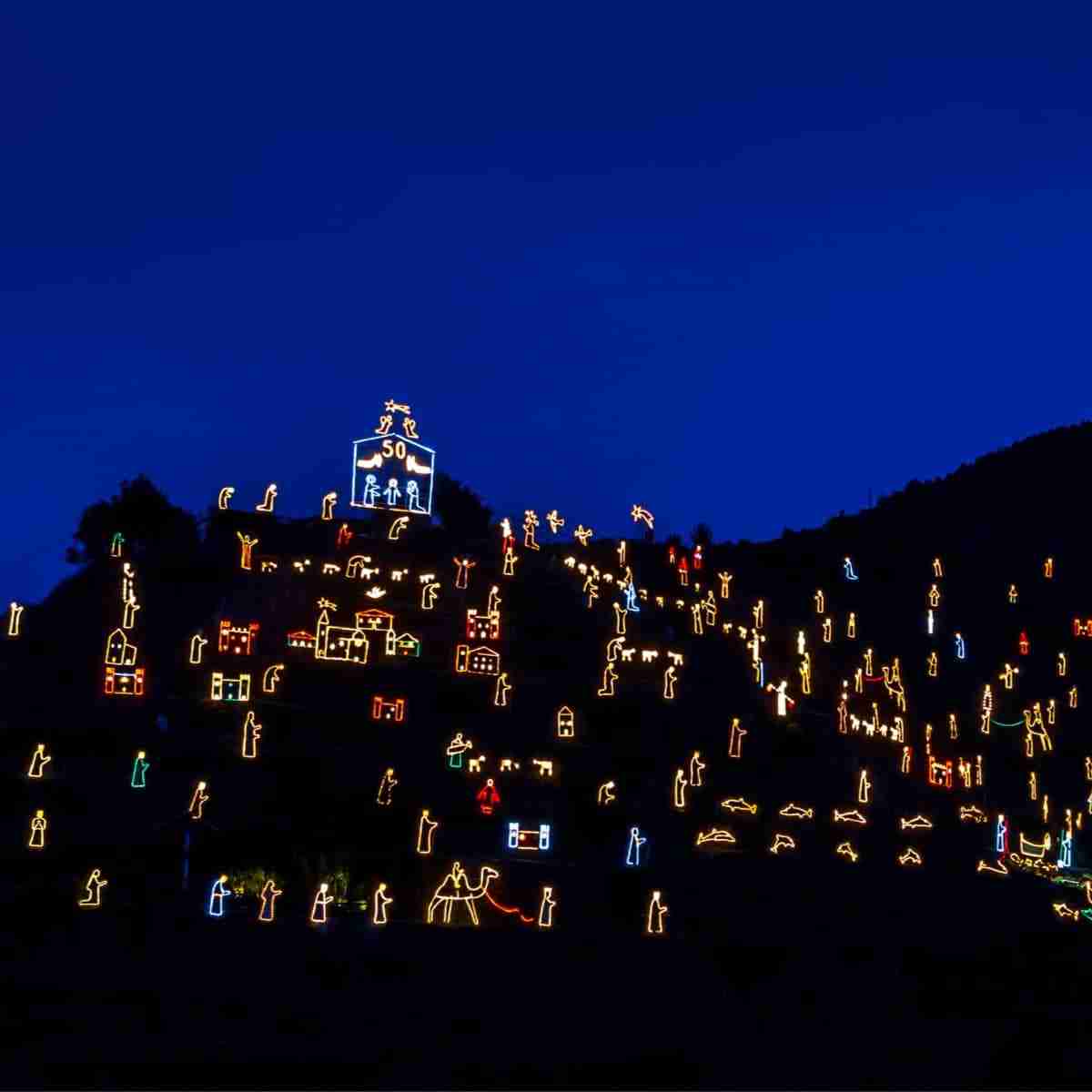 Christmas in Italy: The Epiphany and the Christmas Witch La Befana

January 6 – Epiphany – is the last day of the Christmas holiday in Italy. This is the day when the three wise men with their gifts reached the stable where Jesus was born, but the most famous Italian tradition for this day has nothing to do with them.

In the night of 5. on the January 6 brings la Befana, an old and ugly lady flying on a broom brings chocolate to the children. Again, only good kids earn the chocolate from the Christmas witch, bad kids only get some coal…. but again not a single case of a child receiving coal from la Befana was reported! 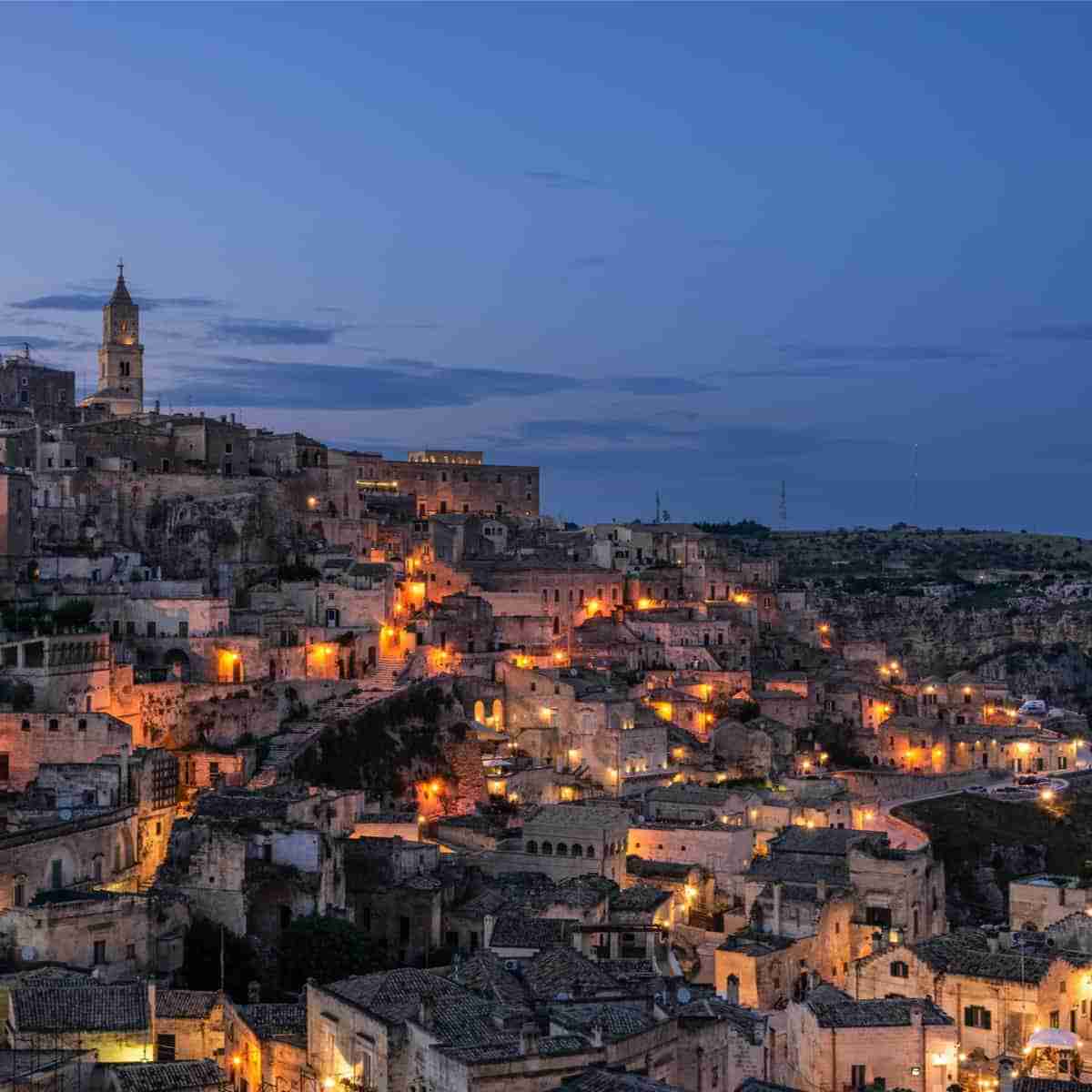 Christmas in Italy: The rock city of Matera, by night (photo © Shutterstock.com)

Golf clubs, top hotels, attractions and the best restaurants for your golf and dolce vita vacation in Italy.