VisitItaly.Golf presents you the most beautiful golf hotels Sicily and the best wellness hotels, luxury apartments and resorts for your golf vacation on the unique Mediterranean vacation island. Choose between selected top hotels & resorts in the famous destinations and places in Sicily. Experience and enjoy unique golf hotels in Sicily.

All our selected golf hotels on the vacation island of Sicily meet a large part of the following quality criteria: 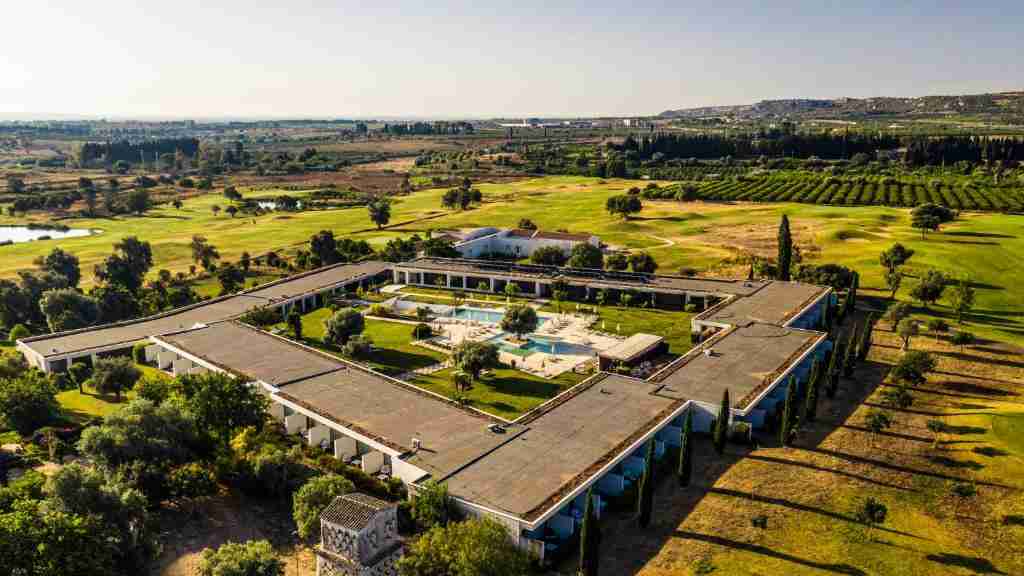 Borgo di Luce I Monasteri Golf Resort & SPA offers a wellness center 18 km from Syracuse. It offers an outdoor pool and free Wi-Fi in public areas and in all rooms.

The resort’s elegant, air-conditioned rooms are located in a Benedictine monastery. Amenities include a 32-inch flat-screen satellite TV. Some rooms have a furnished terrace with a view. 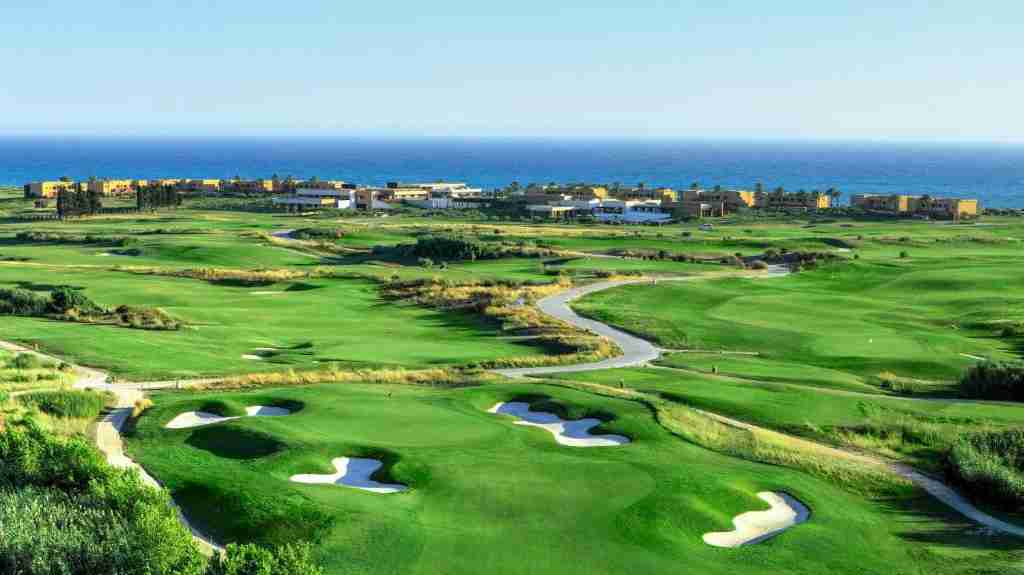 This unique golf resort in Sicily, is located 2 km from the coast and is surrounded by 230 hectares of olive groves. It offers a private beach, 3 golf courses of the Verdura Golf Club and unrestricted sea view.

Verdura’s sports facilities, one of the finest golf hotels in Sicily, include six tennis courts, two 18-hole golf courses, a 9-hole golf course, a 60-meter infinity pool and a gym. The resort’s jogging path winds past lemon and olive groves.

Verdura Resort offers four thalassotherapy pools, a variety of beauty treatments and a variety of massages. The Verdura Resort’s restaurant and bar offers a wide selection of fine wines and typical Sicilian cuisine. 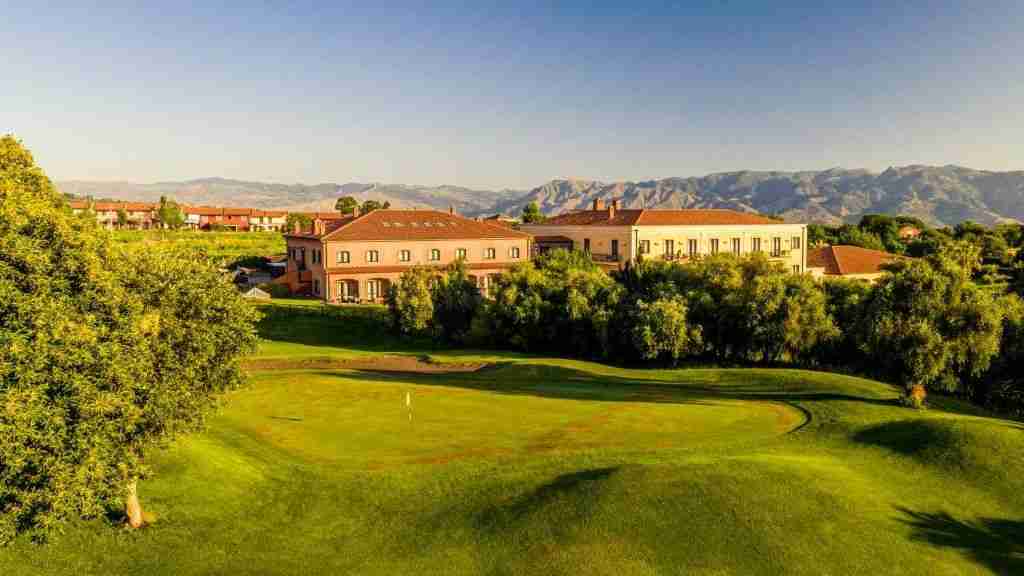 Etna Golf Resort & Spa is located in the Parco dell’Etna Regional Park at the foot of a volcano. The resort will delight you with its breathtaking scenery. It offers elegant rooms with air conditioning.

The park around Etna Golf Resort & Spa has a typical Mediterranean vegetation with vineyards and orchards. Discover beautiful beaches and ancient Greek ruins nearby.

Etna Golf is located 650 meters above sea level. Here you can enjoy pleasantly cool temperatures all year round.
The wellness center at Golf Resort & Spa promises relaxation on more than 900 m² with changing rooms, fitness room, sauna and a well-equipped swimming pool with spa facilities.

Guests have access to the 18-hole golf course of a partner hotel next door. The restaurant also serves traditional Sicilian cuisine.

Golf clubs, top hotels, attractions and the best restaurants for your golf and dolce vita vacation in Sicily. 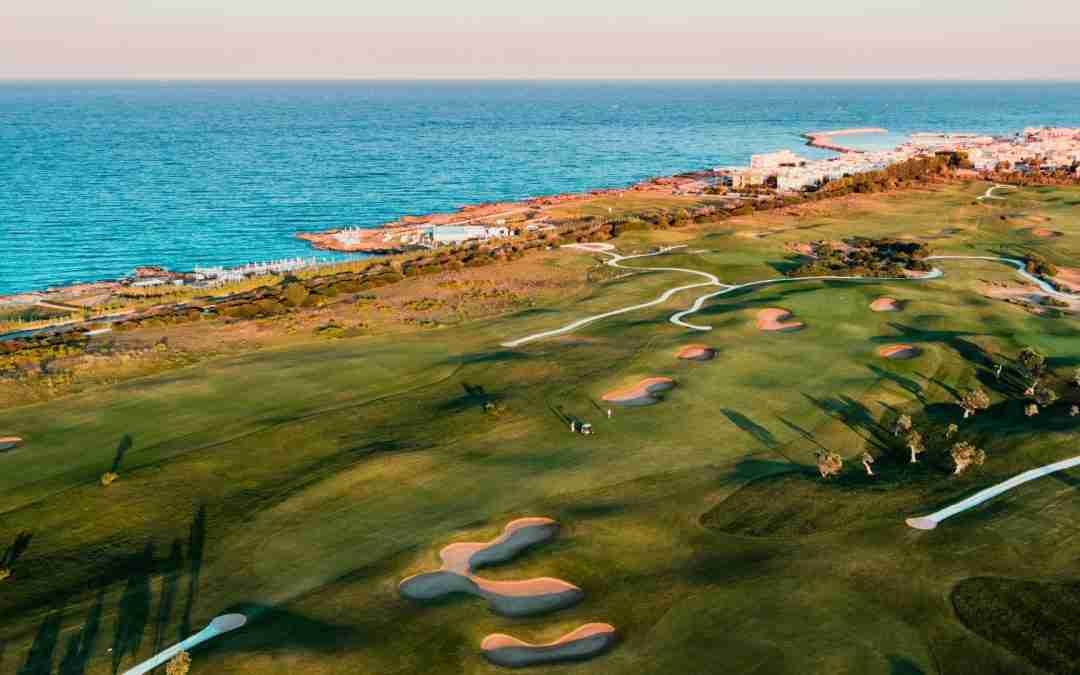 The best golf resorts and golf hotels in Puglia

All our selected golf hotels in Puglia meet most of the following quality criteria: 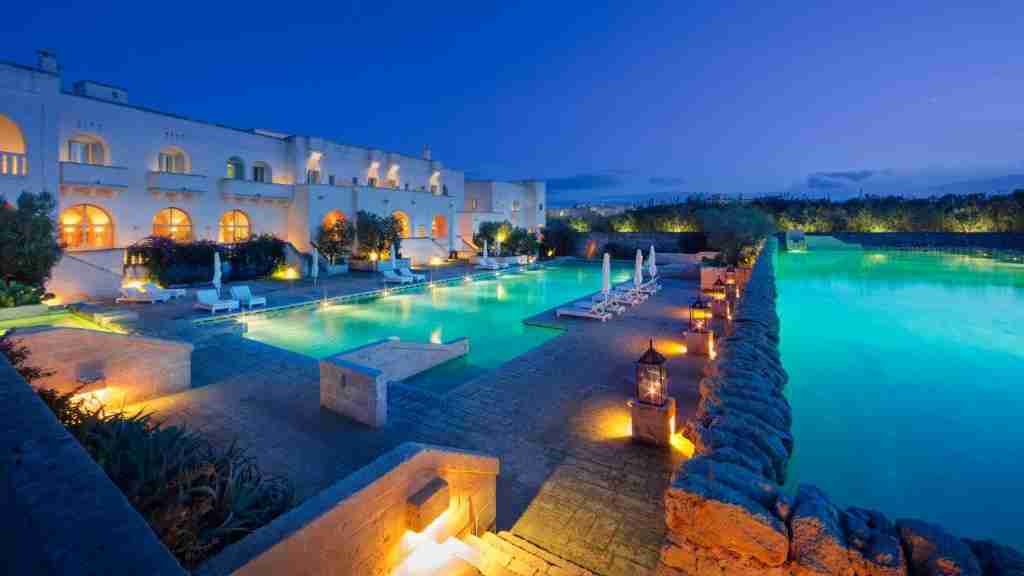 The exclusive resort Borgo Egnazia is located between Bari and Lecce in the southern Italian region of Puglia and is arguably one of the best hotels in all of Europe. Situated between the Adriatic coast with private beach and the beautiful landscape characterized by olive groves, this luxury golf hotel welcomes you all year round. The golf resort consists of 3 separate but interconnected areas – La Corte, Il Borgo and Le Ville, offering a choice of accommodation in rooms, apartments and villas. At the Borgo Egnazia Hotel you can expect traditional Apulian architecture, a beautiful setting surrounded by Mediterranean vegetation, 4 swimming pools and a 1,800 m² wellness area.

The luxurious rooms are decorated in soft white tones. All rooms have a private balcony with a view of the hills, the sea or the San Domenico Golf Course. The Borgo Egnazia complex is surrounded by extensive Arabic gardens and dry stone walls. There are also 3 tennis courts and a private beach club in Savelletri di Fasano, 1.5 km away. Enjoy Mediterranean cuisine on the terrace with sea view or under the traditional vaulted white stone ceiling.

Between the golf hotel and the sea, surrounded by olive groves, lies the 18-hole championship golf course of the San Domenico Golf with a magnificent view. The Puglia region is a unique destination in Southern Italy due to its charming climate, beautiful landscapes and cultural and culinary diversity. 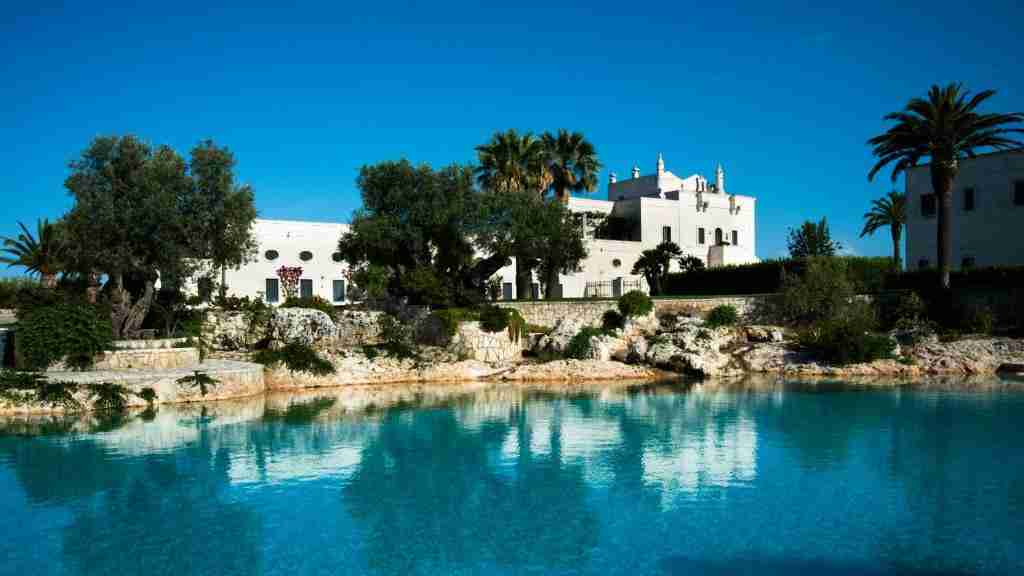 The 5-star resort Masseria San Domenico is luxurious and imposing. Located just a 10-minute drive from Fasano, it offers a private beach, an outdoor pool and a well-equipped wellness and thalassotherapy center in the Puglia region.

The state-of-the-art center features a steam room, sauna, whirlpool, and fitness room with state-of-the-art fitness equipment. From the large 18-hole San Domenico Golf Course you can overlook the Adriatic Sea in all its splendor.

Housed just 2 kilometers from the hotel’s own beach, Golfhotel San Domenico also has large open spaces that include 2 tennis courts.

The towns of Savelletri and Torre Canne are 5 and 10 minutes away by car respectively.

The rooms at the Golf Hotel are all individually designed and feature free Wi-Fi in addition to air conditioning and LCD TV.

Pugliese specialties and wines, as well as classic Italian cuisine, await you at the pool-view Al Fresco restaurant. The hotel itself grows vegetables and fruits and produces olive oil. 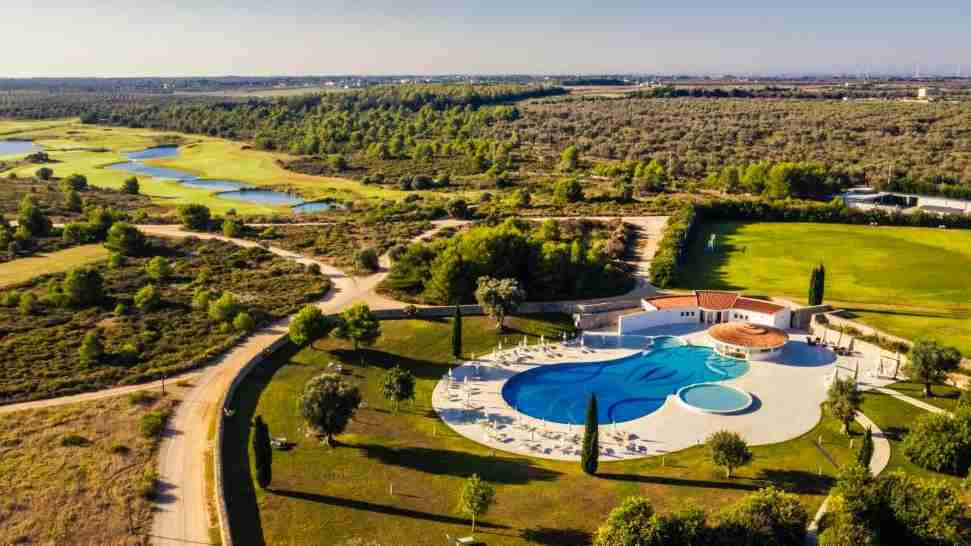 Acaya Golf Resort & Spa features an 18-hole golf course, spa and two outdoor pools. The Cesine nature reserve is 3 km away. The beaches of the Salento Peninsula are a 5-minute drive away.

Rooms at Acaya Golf Resort & Spa are elegant and feature LCD televisions. A minibar and tea and coffee accessories are also provided.

From the rooms you can enjoy views of the golf course, the gardens or the Puglia countryside. Bathrooms are equipped with toiletries, bathrobes and slippers.

The golf hotel has an elegant golf club, the Acaya Golf Club, which houses the Acaya Golf School and the Golf Pro-Shop. There is also a 1,200 m² spa area with whirlpool, sauna and Turkish bath. Acaya Golf Resort & Spa offers a variety of restaurants and bars serving upscale local cuisine. Drinks are available at the pool bar. 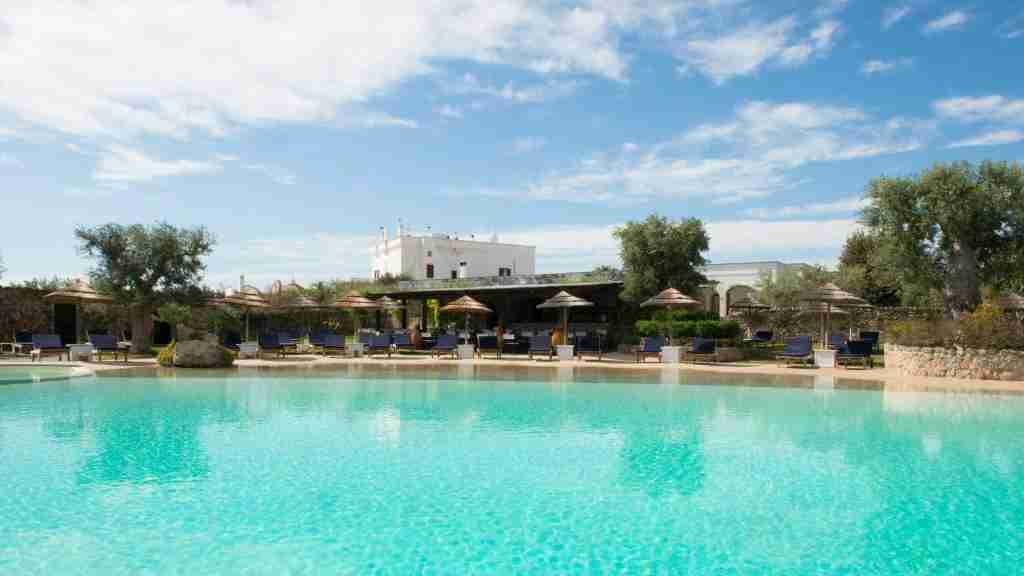 This luxury and golf hotel Masseria Torre Coccaro is located in an old watchtower near the beautiful beaches of Puglia. It is surrounded by olive groves and is 3 km from the Savelletri exit of the SS16 national road. Masseria Torre Coccaro features a large outdoor pool, a private white sand beach, and an exclusive wellness center that guests can use free of charge. Also relax in the heated indoor pool, Turkish bath and whirlpool.

The elegant rooms and suites of the Torre Coccaro all have a private garden and terrace. Each room also has free Wi-Fi and wireless iPod connectivity, and some rooms have fireplaces or whirlpool tubs. Enjoy typical regional cuisine in the restaurant. Masseria Torre Coccaro uses fruits and vegetables from the hotel’s own organic farm, as well as high-quality local meats, fish and cheeses. From May to September, a free shuttle takes you to the Masseria’s private beach club, 4 km away. There is a fish restaurant and a sushi bar. Nearby is the beautiful 18 hole golf club San Domenico Golf. 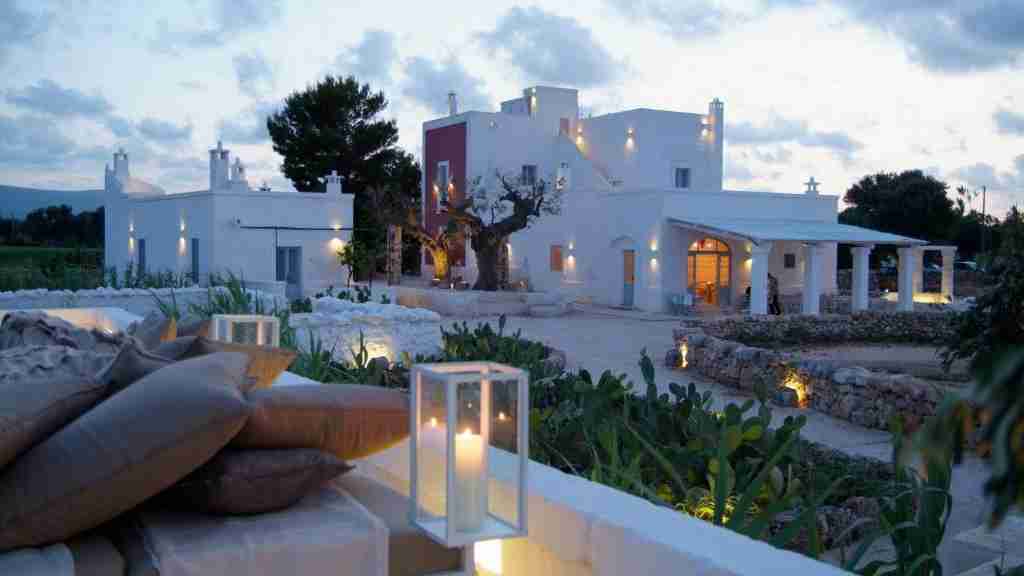 Golfhotel Masseria Cimino is located in Savelletri di Fasano, in the Puglia region of southern Italy.

Masseria Cimino is a traditional farmhouse with tower built in the 18th century, just a few meters from the sea and inside the archaeological excavations of the ancient 6th century Roman city of Egnatia. The ancient rocks that surrounded the walls of Egnatia were used in the 18th century to build the Masseria Cimino, on whose walls ancient engravings from Roman times can still be seen.

The golf hotel “Masseria Cimino”, surrounded by vegetable gardens and centuries-old olive groves, was a fairly large agricultural center, used to cultivate fields and store products. Part of the buildings served as housing for the workers of the “Massaro” and as occasional residence for the owners, as was the case with most massarias in Puglia.

In 2001 was built around the Masseria the San Domenico Golf, a beautiful 18-hole golf course with a magnificent view of the Adriatic Sea. In 2005, Masseria Cimino was completely renovated, preserving the original structure and architectural features, fully respecting the original materials, shapes and colors. 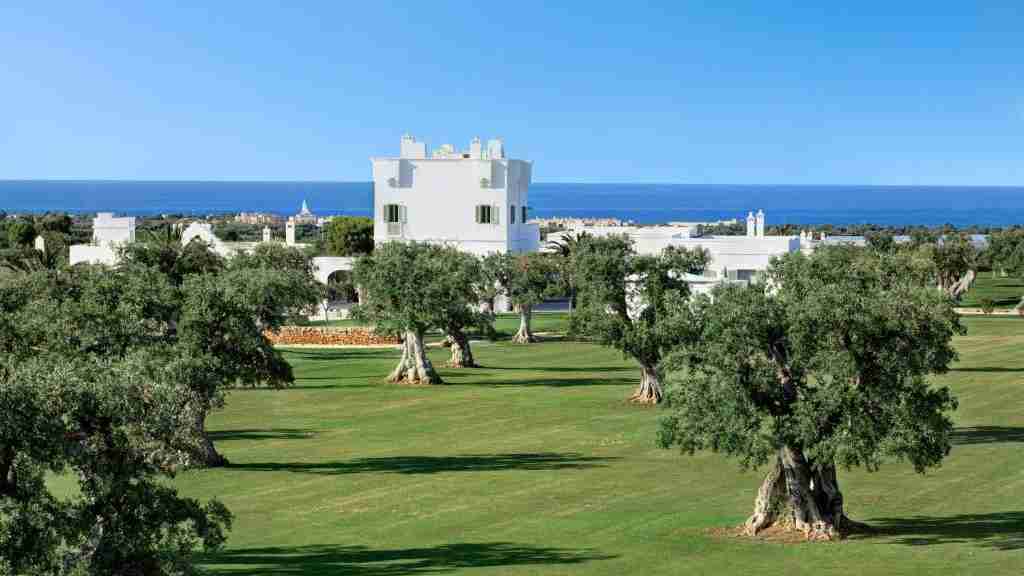 Masseria Torre Maizza is located on a spacious property near the village of Savelletri di Fasano. It has a stylish restaurant, pool bar, rooftop bar, 20 m² pool, wellness area and its own beach club.

All rooms and suites are spacious and furnished by local craftsmen. Each room and suite has its own garden and offers views of the Apulian countryside. Masseria Torre Maizza’s bar and restaurant serves fine Italian cuisine. The rooftop bar serves expertly prepared cocktails. 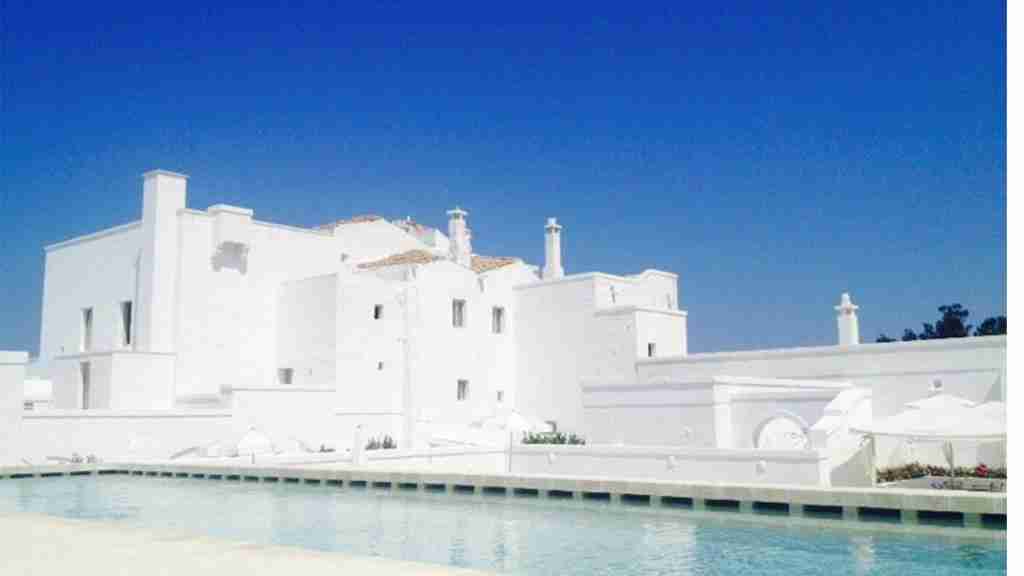 The Golf Hotel Masseria Le Carrube is a typical farmhouse (masseria) with traditional tiled roof, walls made of stone on the inside and white lime on the outside.

The hotel is located just 6 km from the city center of the “White City” Ostuni, at the foot of the hill, in a secluded and exclusive area characterized by the maquis, the typical vegetation of the Mediterranean region of Puglia.

The Masseria Le Carrube has undergone a renovation, under the careful supervision of the owners. As a result, 14 rooms were created, which are characterized by a warm and cozy ambience. They have the rustic look typical of the buildings in this area, but are elegant and offer every comfort: air conditioning, minibar, LED TV and Wi-Fi. 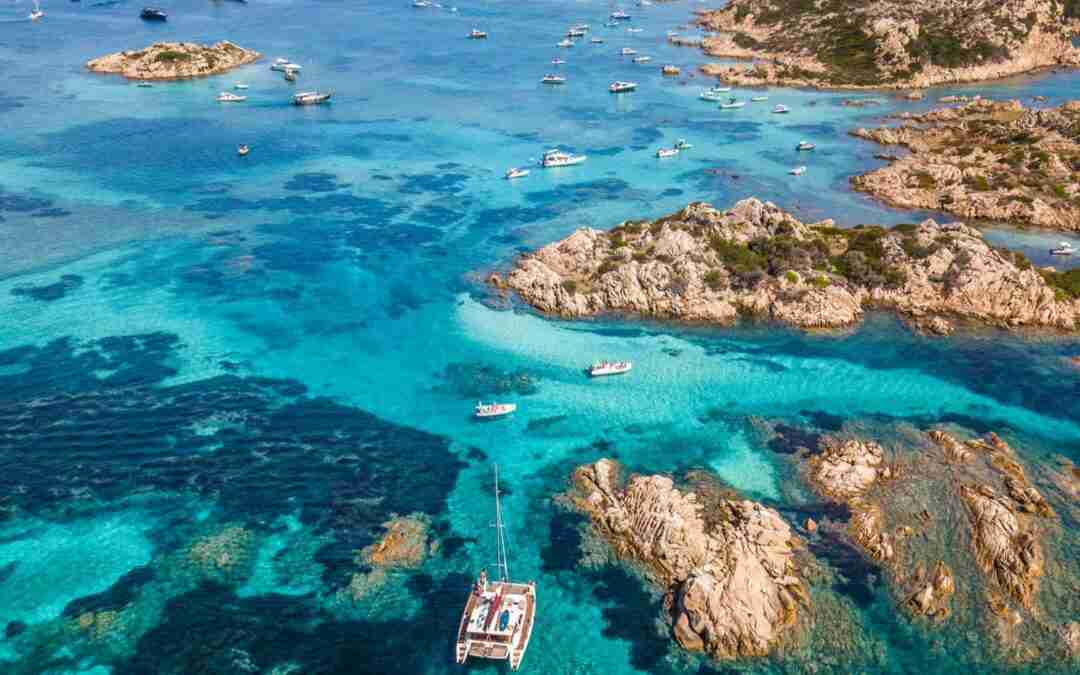 The best golf resorts and golf hotels in southern Italy

Golf in Italy presents you the most beautiful golf hotels in Southern Italy and the best wellness hotels, luxury apartments and resorts for your golf vacation. Choose between selected top hotels & resorts in the well-known destinations and regions of Puglia, Sicily, Sardinia and more. Experience and enjoy unique golf hotels in southern Italy.

All of our partner golf hotels on Lake Garda meet the majority of the following quality criteria:

Find the best golf hotels and golf resorts in Puglia!

Find the best golf hotels and golf resorts in Sicily!

Find the best golf hotels and golf resorts in Sardinia!

Golf and wellness hotels for your golf vacation in Bella Italia.

Golf courses for your golf vacation in Bella Italia. 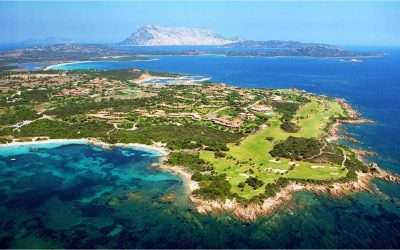 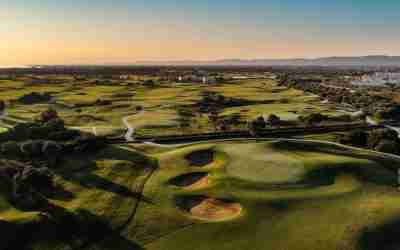 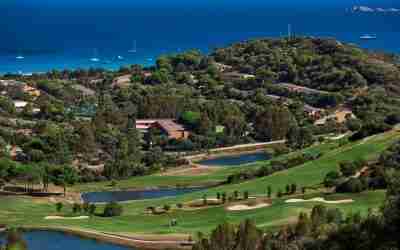 Golf courses and golf hotels for your golf vacation in Bella Italia. 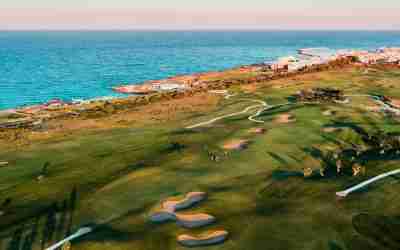 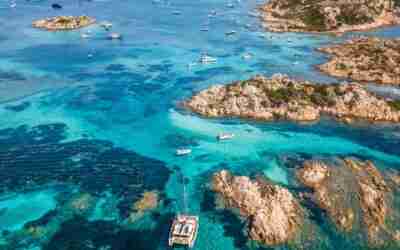