Imposing cliffs, mythical caves and hidden coves: Let’s set out together to discover the most enchanting beaches in Salento.

The Salento Peninsula is located in the Puglia region between the Ionian Sea and the Adriatic Sea and is situated between the provinces of Lecce, Brindisi and Taranto. It has always been famous for its paradisiacal beaches and for being one of the favorite destinations of Italians who choose this country every year to spend their summer vacation in total relaxation, far from the daily chaos of the big cities.

Salento, which figuratively represents the heel of the Italian boot, boasts some of the most beautiful beaches on the peninsula and is known for its peculiar coastal shape, characterized by wide strips of fine white sand to the west and rocky cliffs to the east, rich in rocks and marine life, perfect for diving enthusiasts.

What makes the beaches of Salento one of the most popular destinations in Italy is also their proximity to beautiful towns rich in history, monuments and traditions, such as Ostuni, known for its beautiful historic center painted entirely with white lime, Otranto with its medieval Aragonese Castle and Lecce with its incredible baroque buildings.

Awarded with numerous Blue Flags every year, below we have prepared a list of the best 7 bathing beaches in Salento that you can’t miss during your vacation in Puglia. 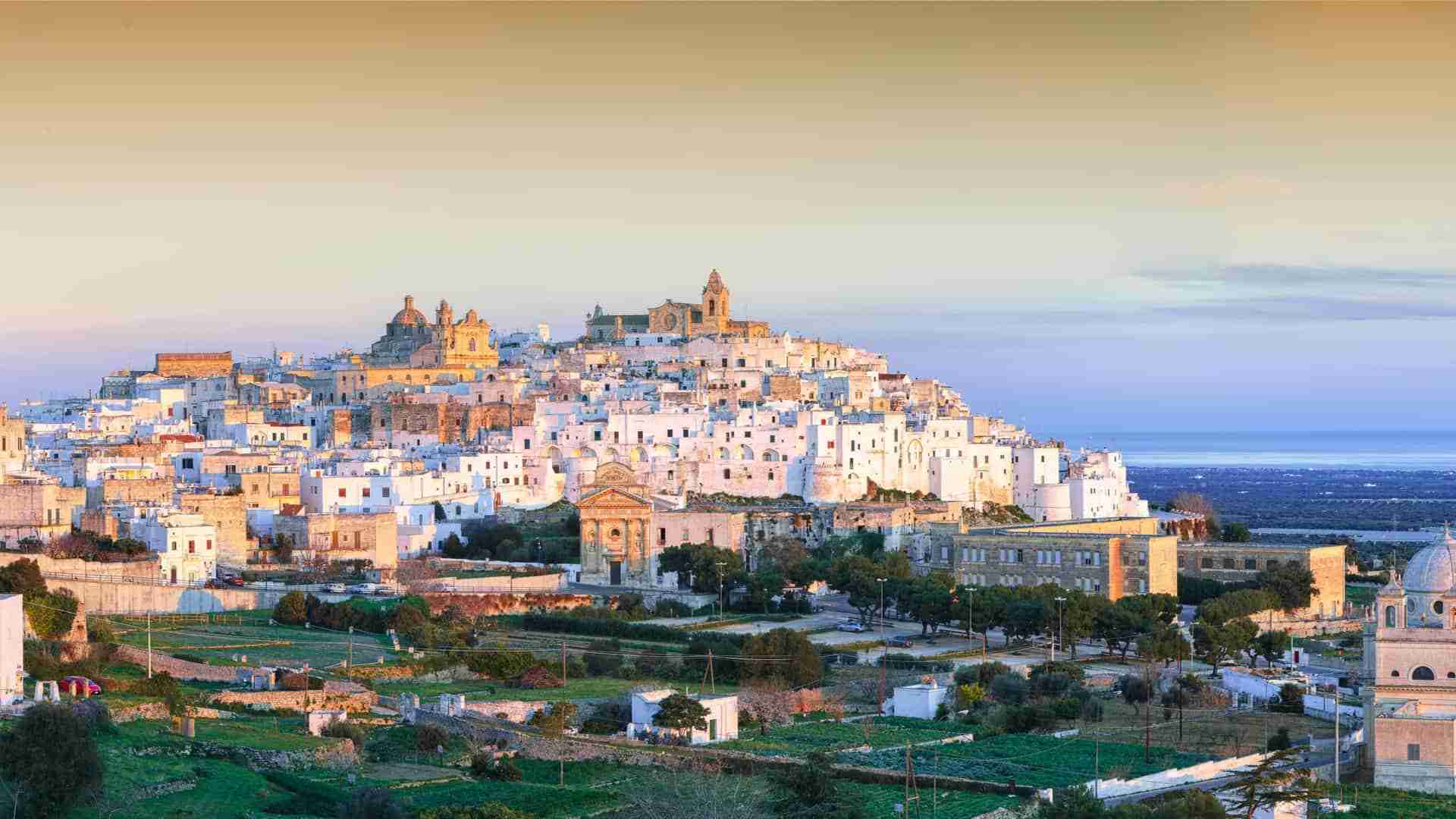 The white town of Ostuni, very worth seeing place on the way to Salento, Puglia, Italy. (Photo © Shutterstock.com)

The beach of Torre dell’Orso is easily reached by car from the center of Melendugno, only 9 km away, and is a crescent of fine golden sand surrounded by impressive cliffs.

Among the various treasures hidden in this place, stands out the cave of San Cristoforo, where there are ancient graffiti dating back to the Latin navigators, and an ancient tower that had the task of sighting possible enemy ships.

Unmissable is also the view from the top of the cliff where you can admire the Two Sisters, two white stacks associated with a sad legend that tells of the tragic death of two sisters. 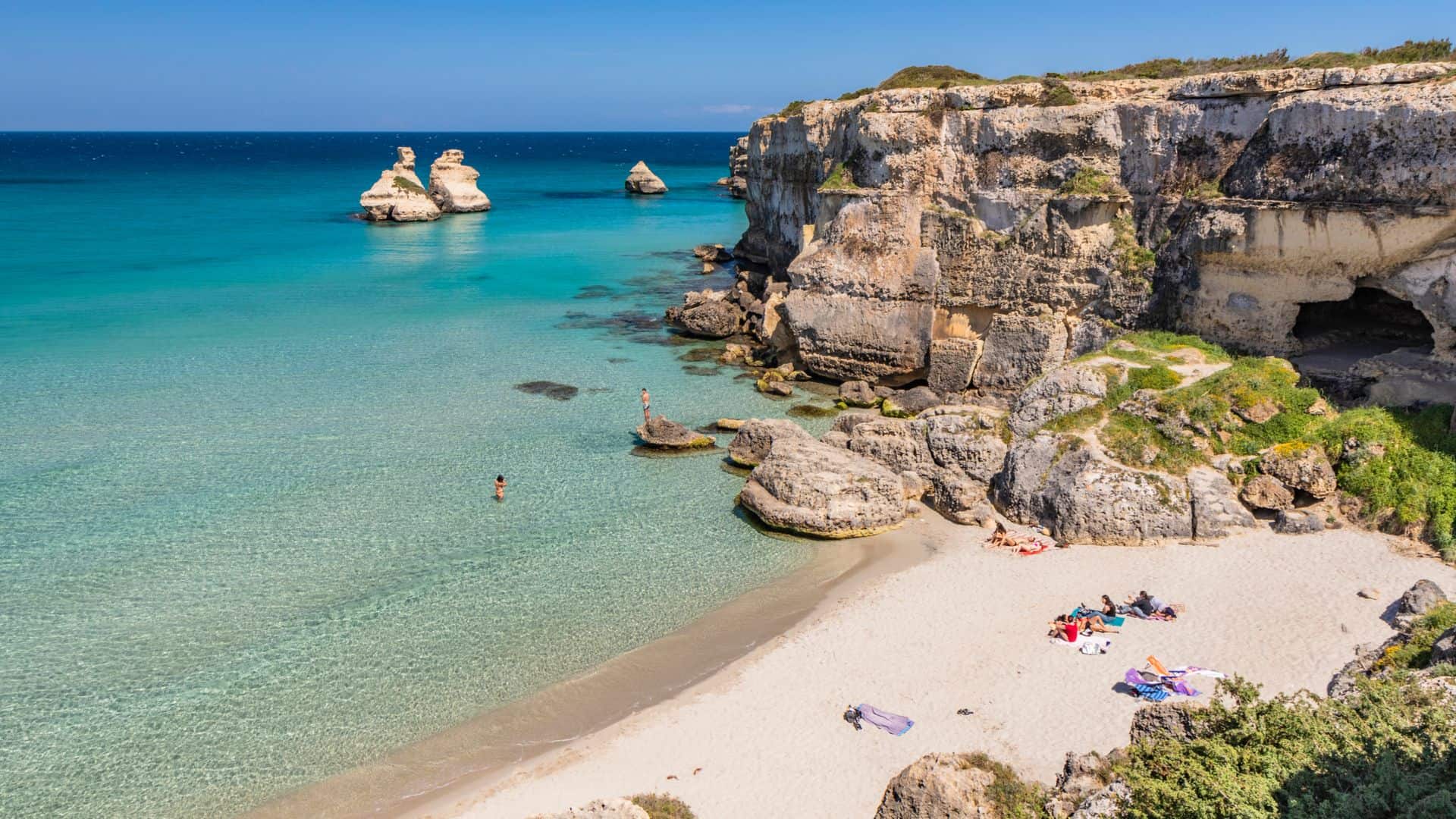 Located in the northernmost part of the Ionian Sea, Torre Lapillo was included in the list of Italian Marine Protected Areas in 2011 and is considered one of the most beautiful beaches in Salento, with its white sand and seabed rich in coral reefs.

This beach owes its name to the nearby Tower of San Tommaso, a watchtower built on the seashore in 1568 by order of Charles V to protect Salento from a possible Saracen invasion.

Today, the tower, with a square floor plan and an access staircase marked by three arches in the lower part, is fully accessible to visitors and has recently been restored. 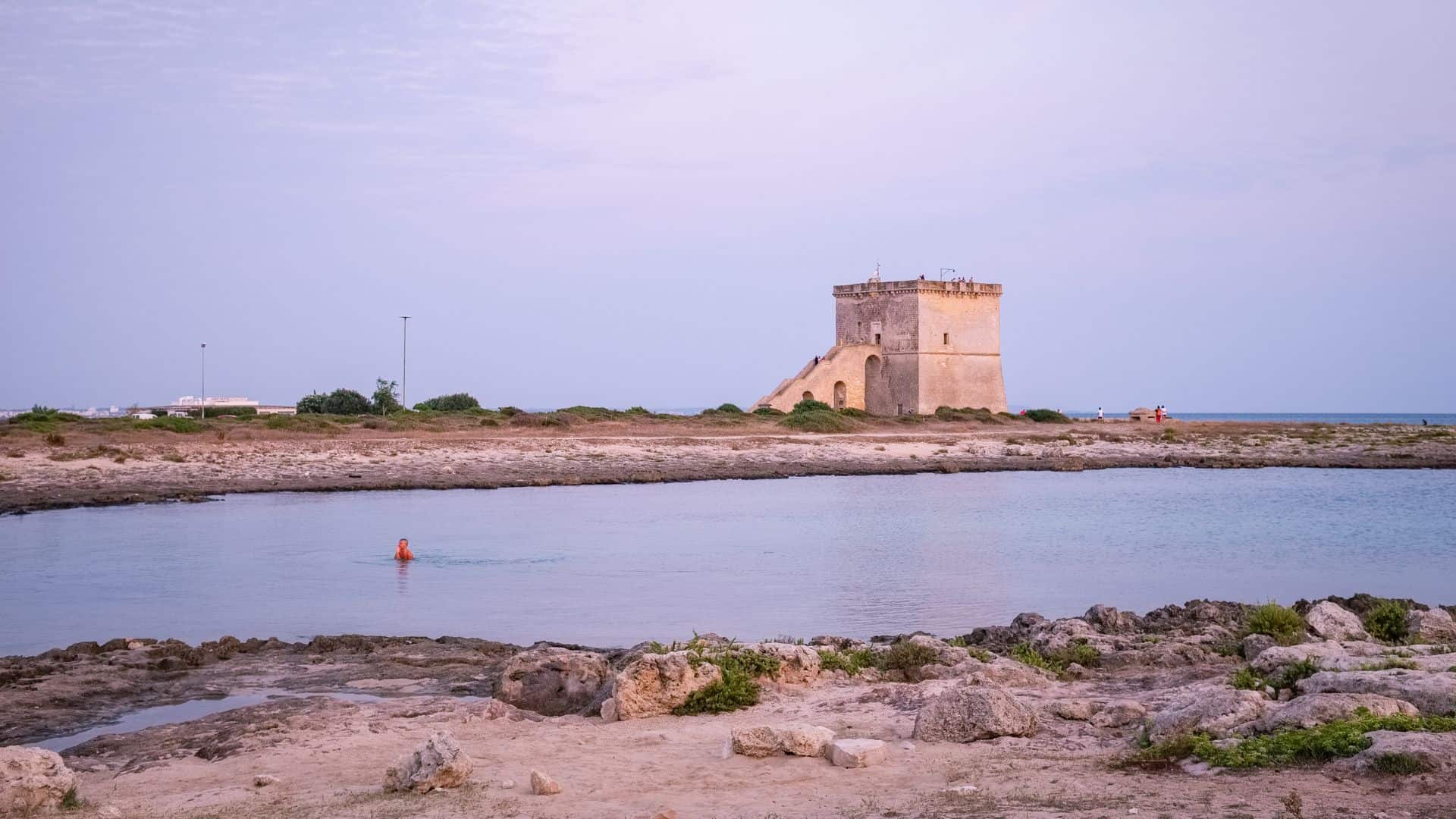 So named in honor of the sixteenth century tower that rises in front of the sea, Torre Chianca is located just 10 km from the city of Lecce and is one of the most popular and visited by tourists beaches.

When the sea is calm, it is also possible to admire the remains of five monolithic columns in Cipollino marble from Roman times, sunk at a depth of 4.5 meters after a shipwreck 2,000 years ago, just 80 meters from the coast. 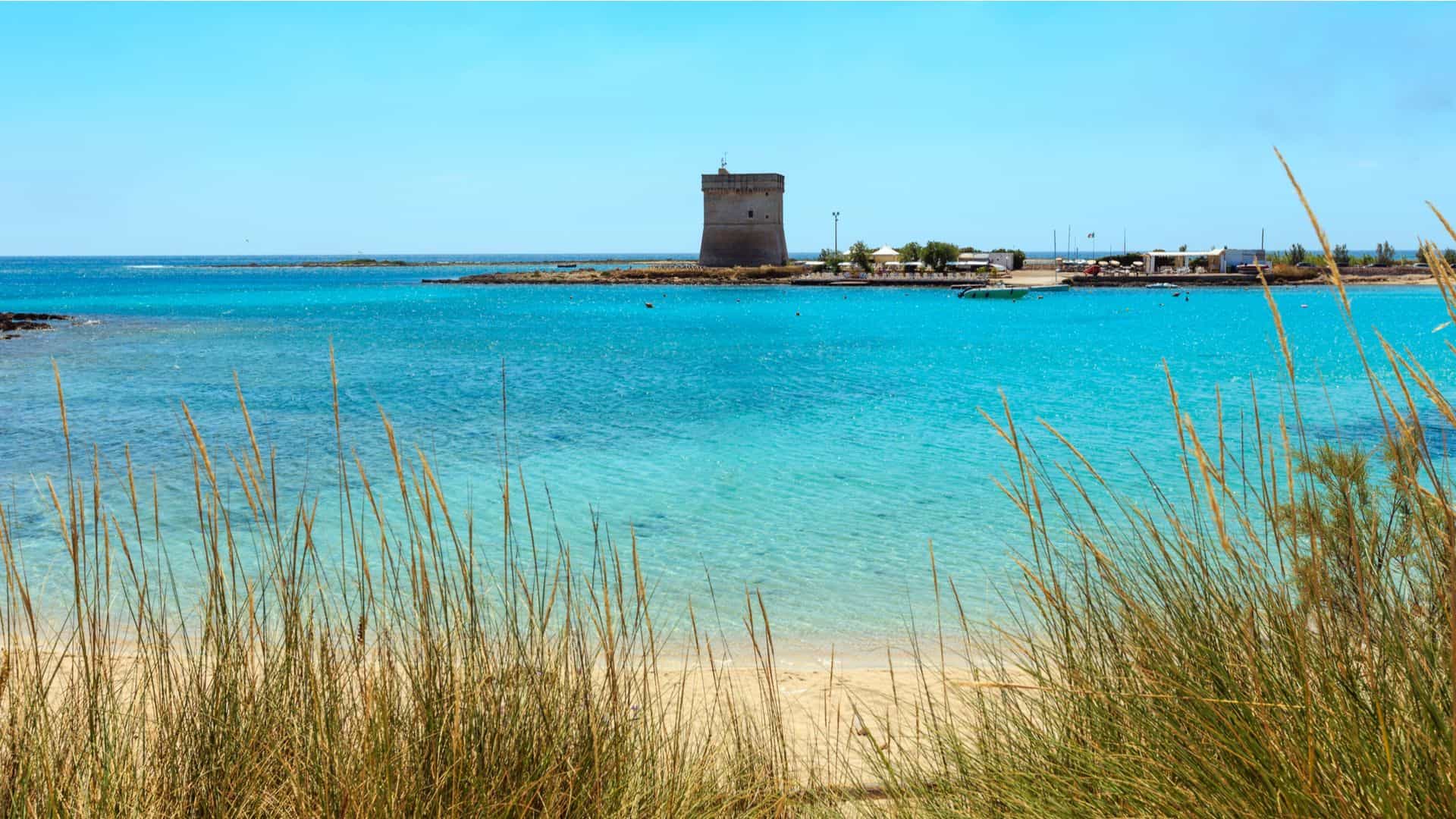 Known as the“Maldives of Salento”, the beach of Pescoluse is absolutely worth seeing and is undoubtedly considered by locals and visitors as one of the most beautiful bathing beaches in Salento.

With its long coastline of about four kilometers, the beach of Pescoluse is protected by beautiful dunes covered with acacias and white lilies that seem to separate the sea (so crystal clear that you can almost see yourself reflected in it) from the rest of the world.

Attracting tourists from all over the world is also the fantastic view that can be admired from the coast, with its many small islands peeking out from the surface of the sea.
If you are planning a visit to Pescoluse this summer, don’t forget to set your alarm and get there early in the morning to get the best possible spot given the large number of vacationers in high season. 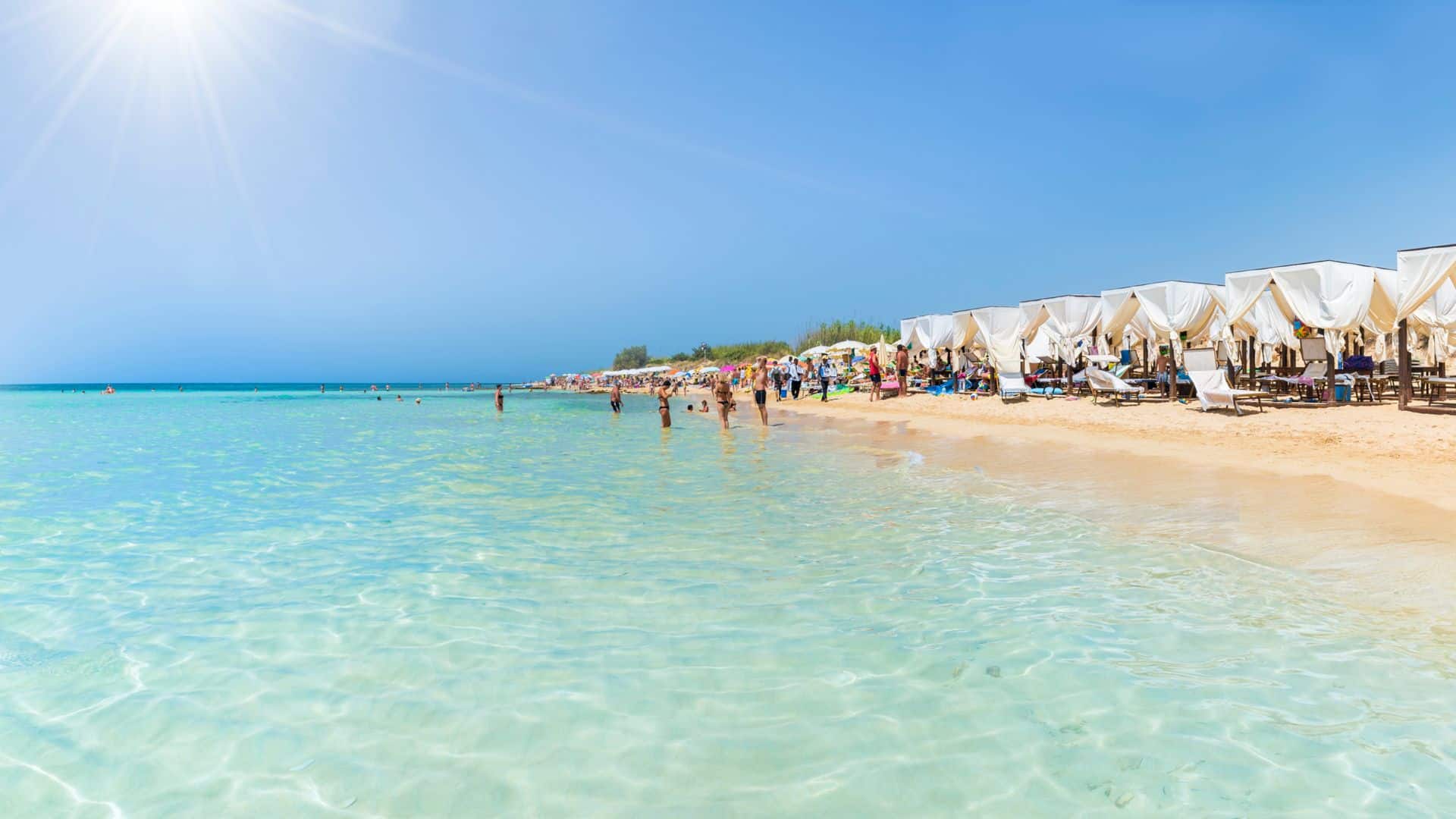 Famous as the landing place of the mythological Aeneas in the eponymous epic, the beach of Porto Badisco is a cove on the coast of the Adriatic Sea, about 8 km from Otranto.

Protected by high cliffs and easily accessible on foot, swimming in these clear waters protected from the currents is a unique experience thanks to the beautiful sceneries that, if you are equipped with snorkel and mask, will show you a diverse Mediterranean fauna.

The charm of this small bay is also enriched by the Grotta dei Cervi, one of the most important archaeological sites in Italy, consisting of a series of caves and tunnels that preserve some of the most impressive and intact Neolithic rock paintings ever found.

Currently, to try the particular climatic conditions in the grotto that have preserved these paintings, the Grotta dei Cervi can not be visited. However, one can visit a virtual tour at Castello di Otranto. 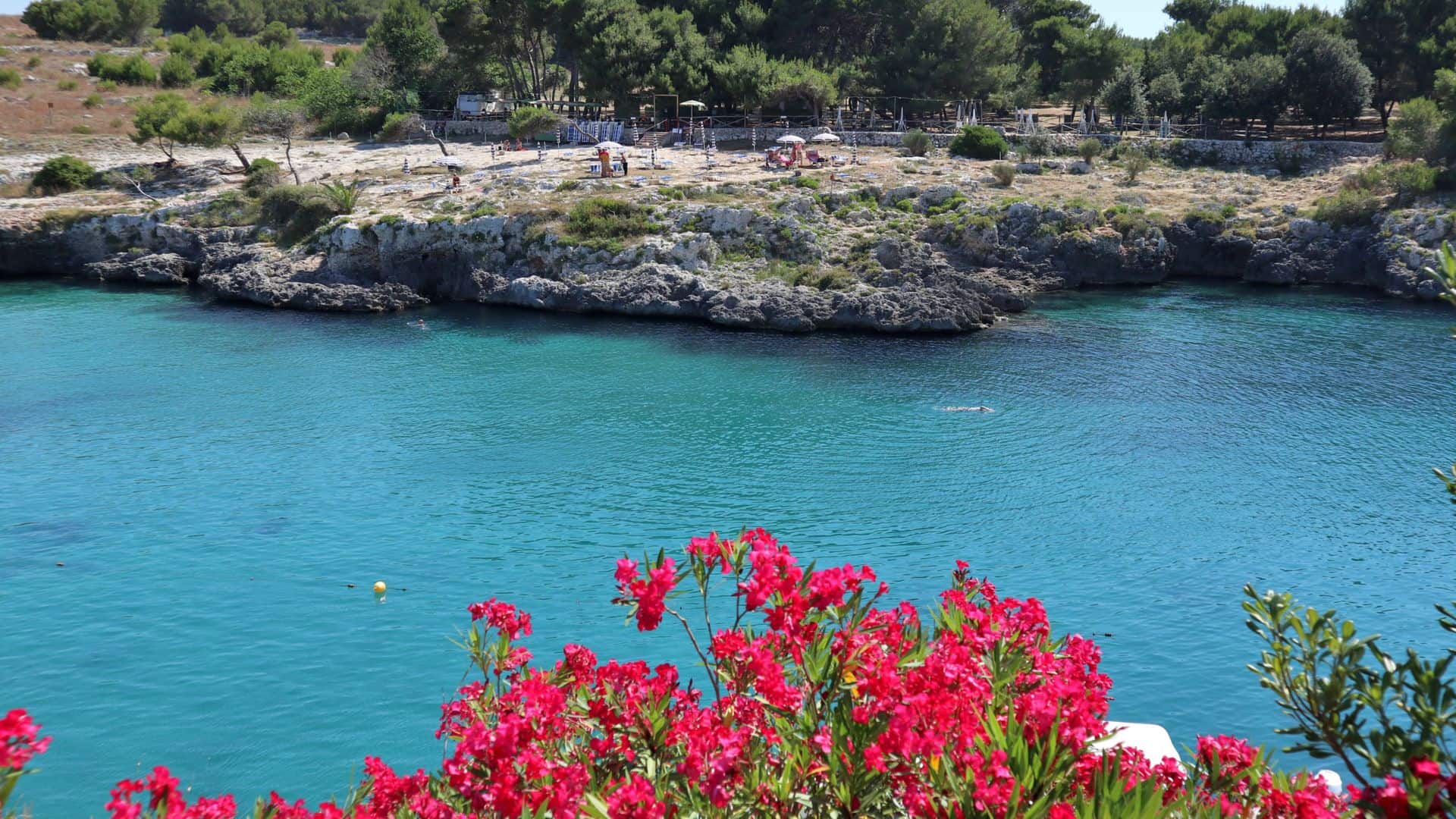 Included by the FAI (Fondo Ambiente Italiano) in the list of the hundred places to be protected in Italy and part of the precious protected oasis of the Alimini Lakes, Baia dei Turchi is located 5 km from Otranto and is a true paradise where unspoiled nature reigns. Certainly one of the most beautiful beaches in Salento!

Traditionally, this beach is considered the exact point where the Turkish warriors landed during the Battle of Otranto in the 15th century. Today it is divided into three sections, a central one where there are two bathing establishments equipped for every need, and two lateral ones that are freely accessible. 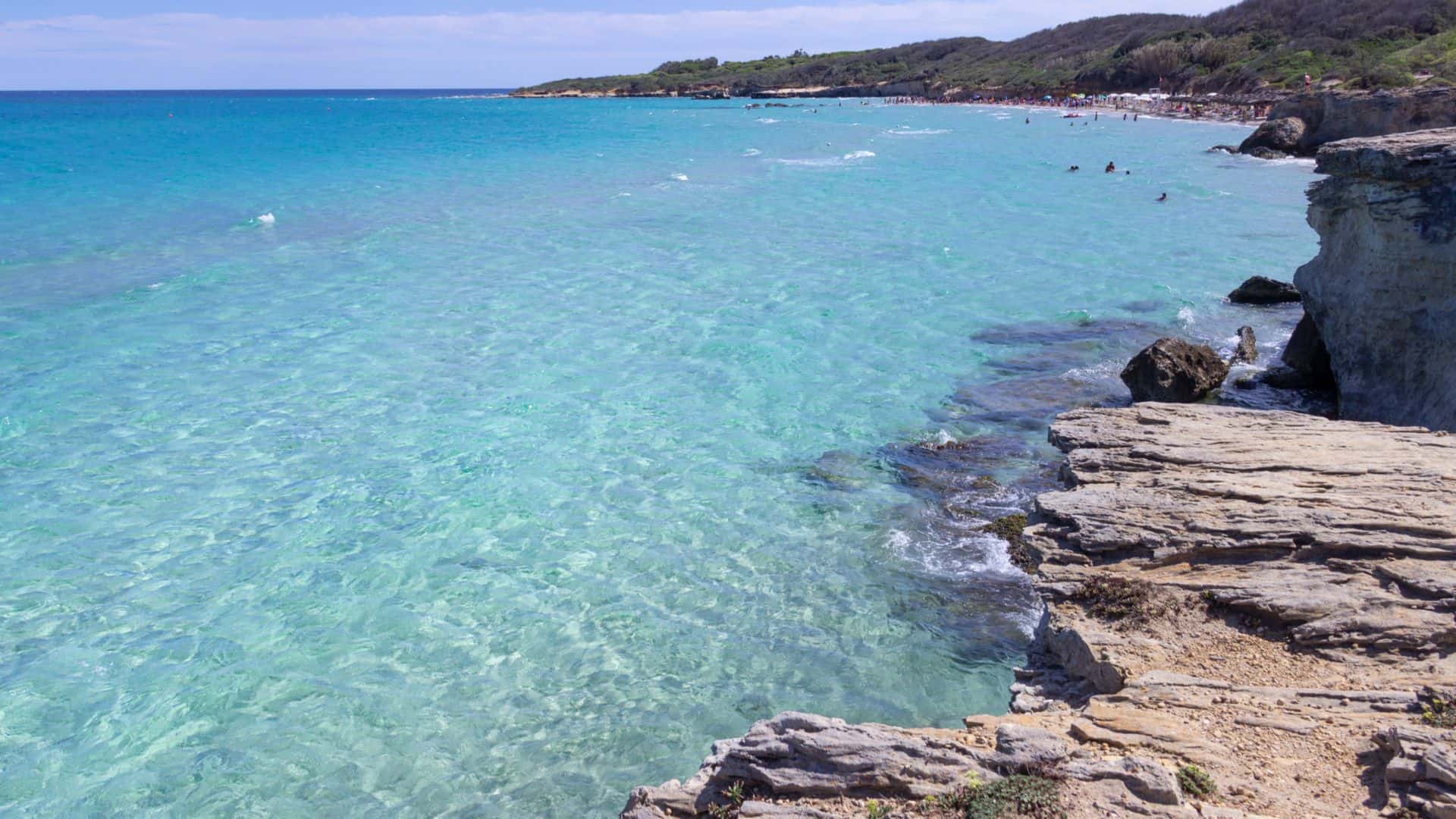 Protected oasis of the lakes Alimini: Baia dei Turchi. Located just a few kilometers north of Otranto, this coast is one of the most important ecosystems in Salento and Puglia, Italy. (Photo © Shutterstock.com)

The most famous and the only one suitable for swimming is the Grotta della Poesia Grande, which leaves you speechless with its clear emerald waters, its immense size, the possibility of diving from a height of more than four meters and the small tunnel, a few meters long, that connects the pool to the sea.
The Grotta della Poesia Piccola, on the other hand, is protected and is a true archaeological treasure of inestimable value thanks to the ancient engravings that have miraculously remained intact to this day. 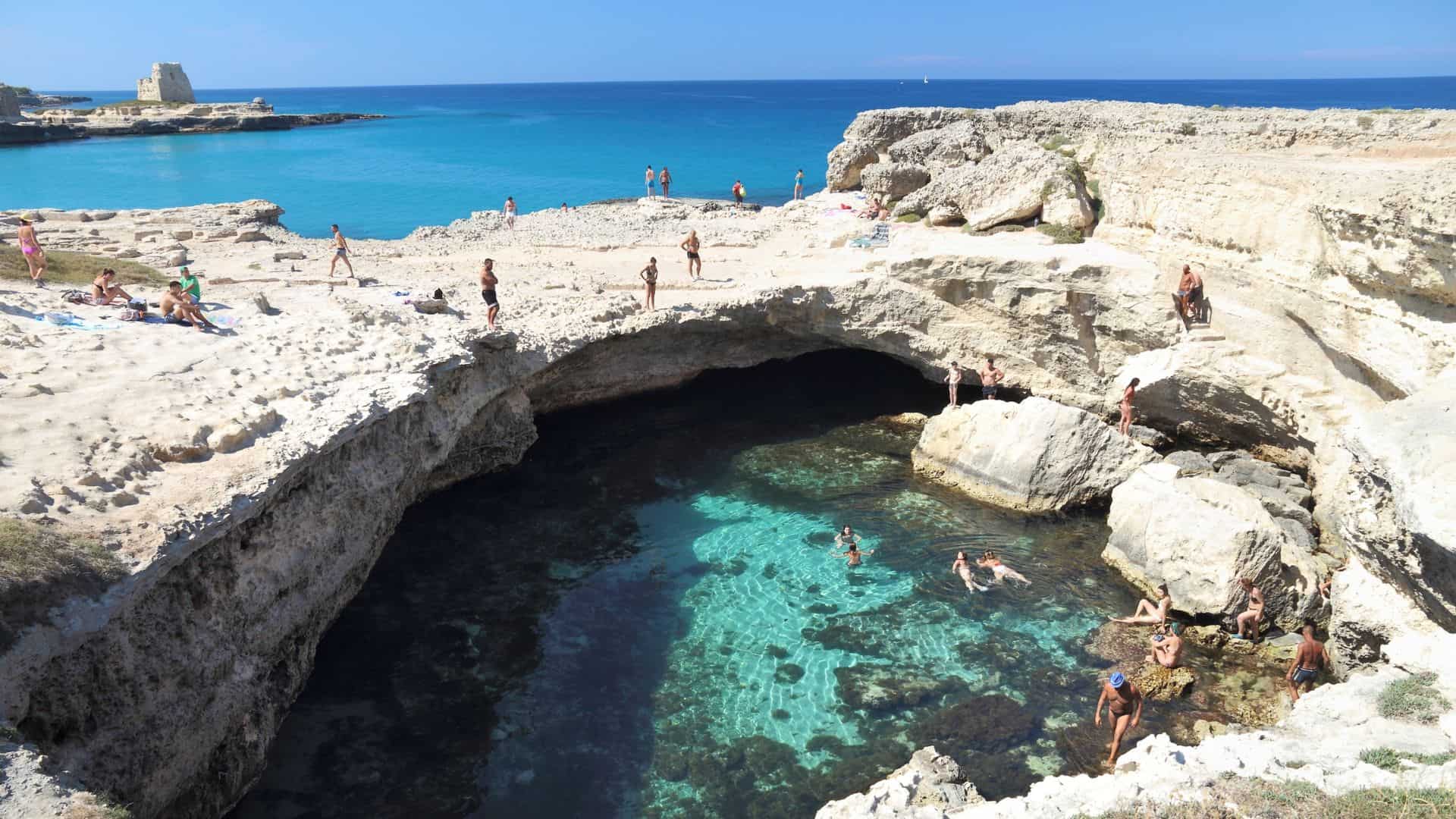 Here we are at the end of this little guide to the most beautiful beaches in Salento, which we hope will inspire you for your next vacation.
Whatever kind of vacation you are looking for, we are sure that the warm Apulian sun, the crystal clear sea and the fine golden sand of the Salento peninsula will fully meet all your expectations.

Top Hotels in Salento and Puglia

The best hotels, resorts and luxury accommodations for your vacation in Puglia